Sara is a very gossipy, religious, fun girl. Sophomore at USC, she’s in the Helene’s and a sorority. She’s from Anaheim, California. And she has an incredibly interesting memory and past.

Sara once visited New York with a friend of hers in high school. She had never ben before and was excited to explore the big famed city. When she got their her friend kept messing with her about the fact that their were alligators in the sewer. Every time they walked over a Manhattan grate on the sidewalk, or a manhole cover and the pedestrian’s crosswalk, her friend would tell her to “Watch out girl, jeez.” Sara was believing it too. It wasn’t until they went home to her friends mother when she asked “How come no one’s done anything about all the dumb alligators.” Her friends mother gave her a state and that’s when she knew she was punked. Her friend was then shamed and shunned for the next fifteen minutes.

The story of alligators stalking the sewers of in American cities, not just New York, is an urban mystery. Most people have heard the rumors about alligators in the sewers, in large part, because of Thomas Pynchon’s 1963 novel.

What would happen is, he wrote of the little pet alligators purchased as Florida souvenirs were eventually flushed down toilets. Then they grew and spread throughout all of Manhattan. Moving through the underground system, Pynchon told us, they were big, blind, albino, and fed on rats and sewage. Pynchon envisioned an “Alligator Patrol going into the depths of the sewer system, working in teams of two, with one man holding a flashlight while the other carried a twelve-gauge repeating shotgun.” As no one before him had, Thomas Pynchon wove the rumor of alligators-in-the-sewers through a work of fiction. But is it all fiction? 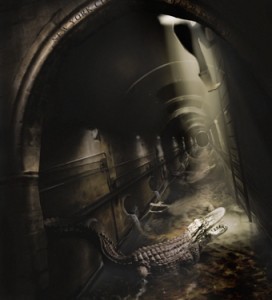