The informant is a junior at USC. She is of Chinese origin, but was born and raised in America. Kim talks about the metaphor of the Chinese Dragon and what it means to the Chinese culture.

Kim: “At a like festival, or you would go to a temple where they have these New Year celebrations. There are people who do dragon dances, so it’s basically like they wear like a dragon head…it’s like a bunch of people, they have like a long train that everyone- there’s a bunch of people holding it up.”

Me: So is the dragon a metaphor or symbol of something?”

Me: “So is that just a New Year’s…? Does the dragon just come around New Year’s?”

Kim: “I mean I think the dragon is like very stereotypically Chinese. I’m pretty sure we do it at other holidays too.”

Me: “So what is the Chinese dragon symbolic of?”

Me: “ Is the fire breathing symbolic of something?”

The informant’s ideas about the Chinese dragon aren’t terribly clear, but I think it can be suggested that the Chinese dragon is a symbol often signifying great strength, power, and dominance. I think it’s a very revered figure, and If it is metaphoric of the emperor, a very powerful and highly esteemed individual, the dragon may symbolize the possess the same qualities for Chinese society. In American culture, dragon’s seem to connote a more dangerous, predator-like stereotype.

This is contradictory to the idea that dragons warn off bad affiliations, as  characterized in chinese culture.

For other developed conceptions of the chinese Dragon along with legends and idioms related to the dragon, see  “The Chinese Dragon: A Symbol of Strength and Power.” ChinaHighlights. Web. 20 Apr. 2016. 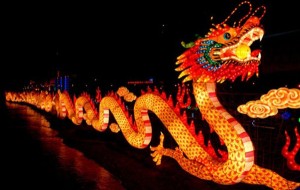