This is done both as a dance and as a game.  Two people hold each end of two bamboo poles and beat the pole on the ground in repetitions of three.  The first two beats are done with the poles apart, and on the third the poles are brought together.  The dancer does series of foot movements to compliment the rhythmic beating of the poles.  The most basic foot movement are as follows:

First beat: One hop on one foot in between the poles

Second beat: One hop, bring the second foot in to meet the first

Third beat: Jump back on to one foot, jumping back to the outside of the poles as they have now been brought together

The informant described this as quite a prevalent practice.  It can be done as elaborately as possible, with women in costume balancing glasses with candles in them in their hands and on their head.  Or one can find young girls and boys playing this at any given time of the day, more to resemble an American tradition of double dutch jump-roping.  It can be played with one dancer, partners, or as many dancers as will fit across the poles. 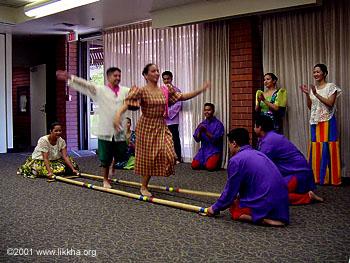 The informant did not know the history of the dance, or was aware of any details as to its origin.  With a bit of internet research, I found many versions of stories and places of origins, ranging from imitations by peasants of birds, to something involving field workers during Spanish colonization.  I think that this discrepancy in itself emphasizes the significance of the practice itself, in isolation from whatever history it may have.  Additionally, because this is such a widely practiced activity among all ages, regions and social groups, its accessibility lessens the necessity of an explanation.  This is not a tradition that comes out only on special days or to commemorate some historically significant occurance, it does not require special training or practice (although there are obvious different degrees of complexity), it is something anyone on any day.  It is a national game of the Philippines not because of historical significance, but is truly national  because of  ongoing popularity and accessibility by all.

Annotation:  There is an encyclopedia Brittanica entry on Tinikling that can be found with the following link: