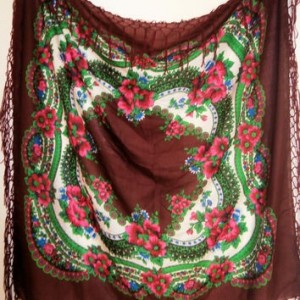 The informant’s parents are both from Russia, having grown up in a small town outside of Stalingrad. Though Rachel was born here, the recentness to which her parents moved has caused them to enrich her life with lots of Russian culture. In going to her house one weekend, I noticed several of the scarves like the one above laying around and inquired as to what they were. She explained that they were head scarfs her mother made that women often wore in the countryside of Russia. When I asked her why, she explained that the Orthodox Church is a very big part of Russian culture and women were required to wear them to Church. She also said that they symbolize that a woman is married.

She then showed me other scarves that her mother made. I thought this was really cool, as in America there are very few things that people make besides the occasional knitted item a mother or grandma might create. The informant told me that her mom would go out and buy special fabrics then knit the fray on the edges of it to give it a more decorated look. She further explained that her mother learned this from her grandma, and that girls in Russia would always learn from their grandmas and mothers how to make scarves and clothing items such as these. The scarf is still a big part of Russian culture in the countryside, and its very common to see woman wearing them when at work on a farm. I asked if the informant knew how to make these, but she explained that her mother has yet to teach her, though she’d like to learn at some point in her life. I really liked my friend showing me this part of her culture and thought the designs of many of the scarves were beautiful.