Informant MV is my mother who is both Croatian and Italian. She was born in the United States and grew up in Los Angeles, CA. Her parents immigrated from Croatia to the United States in 1958. MV speaks Croatian fluently and has two daughters who she raised within the Croatian and Italian traditions and culture. Bakalar is a traditional Croatian dish from the coastal region of Dalmatia that is served on Christmas Eve.

What kind of dish is Bakalar?

MV: “Bakalar is a salted cod stew with potatoes that is always cooked and eaten on Christmas Eve. Bakalar, meaning ‘cod’ is the main ingredient. The cod must ferment for at least 2 days for all the favors to come out. Once the fish is cooked, other ingredients like onions, garlic, and olive oil are added to a large cooking pot where you have the potatoes. Then you add the cod to the cooking pot with the potatoes. You can adjust how much garlic or olive oil, depending on your preferences in taste. It’s important that you remove the bones from the fish before you add it to cook in the pot. Then you let everything simmer until you have a consistency that suits you. You also add salt, pepper, parsley, and more olive oil. You can never have too much olive oil.”

How did this dish become so popular on the Dalmatian Coast?

MV: “Well, your Dida (grandfather) told me that cod is not known in the Adriatic Sea so it has to be imported from areas that have cold waters. It has been said that the reason why we have Bakalar in Croatia is because the fisherman from Dalmatia were working on ships that were in the North Atlantic, who learned about this dish while they were away. When they came back to Croatia, they shared their experience with this dish and it became a staple in our cultural cuisine.”

Why do you like making and sharing this recipe?

MV: “It’s a delicious recipe that is pretty easy to make but it takes time to make. If you have the patience and the urge to try something new then it’s a great option. I have shared this recipe with my American friends and they found it to be very tasty.”

Who did you learn this recipe from?

MV: “I learned how to cook from both my parents growing up. I found cooking to be fascinating and relaxing, so as a young adult I picked up a lot of the recipes that my parents made, Bakalar being one of them. My mother taught me this specific recipe while I was probably 15 years old. She showed me step by step how to successfully make this into a stew.”

In what context is Bakalar usually cooked and eaten?

MV: “Bakalar is mostly eaten on Christmas Eve, but we also eat it on Easter and during Lent. Since we are Catholic and don’t eat meat on certain days of the year, Bakalar is the typical go-to dish on those holidays.”

What does this dish mean to you?

MV: “Bakalar is a classic dish that is from our region and it brings back a lot of great memories while growing up. It is a dish that I love to cook and eat. I have enjoyed making and eating it over the years so much that now my kids have learned to make it. You really can’t go wrong with a great dish like this.”

Bakalar, a Croatian cod stew, is a staple of our Croatian culture. It is a main dish that we eat during Christmas Eve and other religious holidays as part of our fasting traditions. You will find Bakalar at almost, if not all Croatian social events or gatherings. This is a dish that brings our families and friends together because it is a dish that is universally loved and cherished by many. 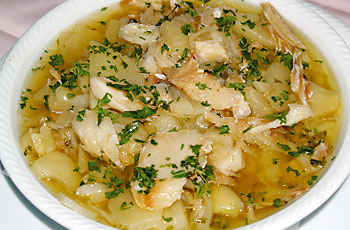