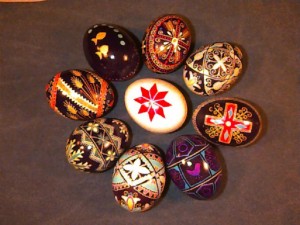 These decorative eggs shown above are called pysanky. Percy learned about this gorgeous form of folk art from his father, who is from IbanoFranchesik, Ukraine. These eggs are typically decorated with beeswax and dyes. During Easter, most Ukrainian households made these eggs as gifts for their family and friends. Percy said that he has a couple of these lying around in his house from past Easter celebrations. However, he has never personally made one before. When he asked his father about the pysanky, he learned that the symbols and colors used hold many deep meanings. Many pre-date the arrival of Christianity, and have had Christian interpretations layered on after Christianity was established.

He also learned that there were some superstitions and myths attached to the colors and designs of the pysanky. His father said that it is wise to give darker colored pysanky with lots of designs to older people, for they have lived most of their life already. Also, it is appropriate to give young people a plain white pysanky with no designs as a symbol of their youth and possibilities for the future. Percy also recalls his father telling him that girls should never give their boyfriends pysanky with no design on the top and bottom of the egg, for that would indicate that the boyfriends would start going bald someday. This was particularly a fond memory for Percy because Percy has a three-year-old sister, and it was hilarious warning her about her future boyfriend at such a young age. He said that he loves the fact that his house is filled with some aspects of the Peruvian culture from his mothers side and some aspects of the Ukrainian culture from his fathers side. When asked how he feels about the pysanky, he stated that he thinks they are a beautiful form of art that he hopes to learn how to make someday. He hopes to be able to preserve this Ukrainian tradition by teaching his future children how to make these eggs.

I believe it is vital for all Ukrainian-Americans, especially of the present generation, to be familiar with such traditional objects, for it illustrates a huge aspect of the Ukrainian culture. It is crucial that these beautiful traditions stay preserved and that people are serious about passing the knowledge on to future generations. It provides a window into the importance of aesthetics in the Ukrainian culture, and allows one to experience the hospitality and generosity of the Ukrainian households as they go around each Easter, presenting these works of art as gifts to their loved ones.[1]

[1] Annotation: This folk object is also mentioned in American Folklore: An Encyclopedia, under the section Ukrainian Americans.