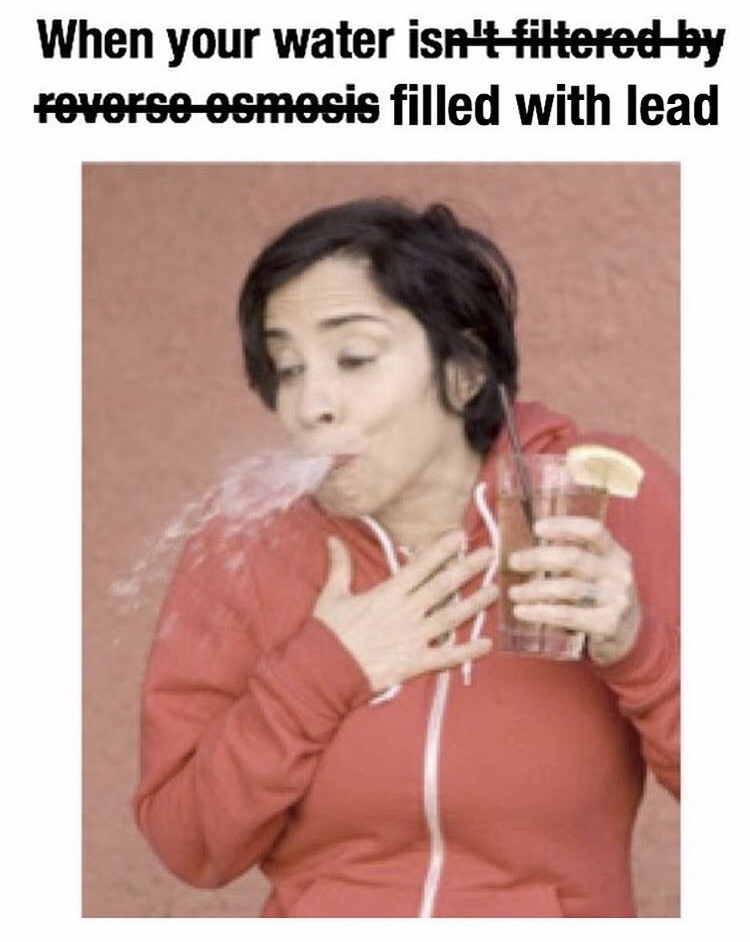 The following is the background of the meme account of Keith School and a description of a meme about lead occurring in drinking water at Keith School from a conversation with NC. Attached is the respective meme.

NC: This meme is kind of like a 2.0 version of a previous meme published on the page. In the previous meme, the joke was about how if your water wasn’t filtered by reverse osmosis, it wasn’t good enough to drink, a concept that started when the school brought in some fitness guru and she had the strangest rules she insisted people follow if they wanted to be healthy, including the reverse osmosis thing. So, the picture in the meme shows the lady spitting out the water in the picture with the caption “When your water isn’t filtered by reverse osmosis.” I redesigned that meme as this one, to fit another one of Keith’s long list of problems. It was released earlier that week that students and faculty should stop drinking the drinking fountain water in the school’s buildings because it had just come to the school’s attention that there were high levels of lead in the water, unhealthy for anyone to be drinking. Keith students found this funny though because it’s such a “Keith” thing to happen; of course, our school would have lead in the water, it’s already so run down and has so many other problems that it really wasn’t that surprising. So, all I had to do was cross out the reverse osmosis part of the original meme and put in “filled with lead” at the end and the meme was even funnier in my opinion because now it was poking fun at Keith. Kind of like, we were such high-class, fancy, private school kids, that we only drank water with lead in it.

Keith School is a private school, and although I’m sure that not everyone who attends is incredibly wealthy, there are definitely enough kids who are that earns the school its reputation for being very expensive and high quality for rich kids. So, it’s easy to see how, when mistakes as bad as lead being found in the water are made by the school, it makes them look really bad, especially with the reputation they have made for themselves. This, along with other happenings at the school, pokes holes in this reputation, and allows for the students who attend the school to make fun of how dingy, worn down, or ridiculous the school is for having such a bad lead problem. It seems that this irony is what makes the meme funny to the students.