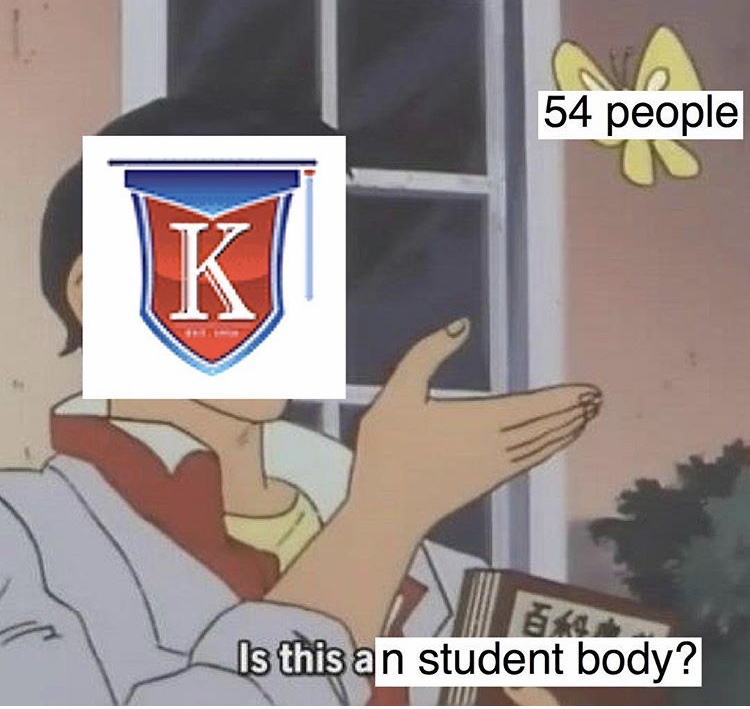 The following is the background of the meme account of Keith School and a description of a meme about the student body of Keith School from a conversation with NC. Attached is the respective meme.

NC: This meme is a spin-off of the popular meme with a surprised boy gesturing and looking at a butterfly in the right-hand corner and a caption at the bottom asking a question. If you want to see other examples of this meme, you can look up “butterfly man meme” in a search engine. I did a spin-off of that meme by photoshopping Keith’s image on the boy’s face, photoshopping “54 people” on top of the butterfly, and making the bottom caption says, “Is this an student body?” Kids who follow the account find the meme funny because Keith School is an incredibly small school with a smaller student body than most, but it always boasts that it is constantly getting more of student body and getting bigger every year; it’s funny because that’s so untrue, haha. In reality, Keith is actually losing student body members, and has never been smaller than it is now.

It’s obvious that the students at Keith Country Day School have little respect for the school, making fun of enrollment numbers through this meme. It seems that Keith is trying to make an attempt to hide that they are struggling, not only with enrollment numbers but also financially as an effect of it. The students see the school struggling and can easily poke fun at the weakness of the institution, especially if they know they won’t be caught doing so with a private meme page.