My friend from Paraguay showed me a traditional decorative cloth that he brought from home, called the nanduti.

Anthony: My mom gave me this embroidered cloth to have while I’m away at college.

Me: What does nanduti mean?

Anthony: It’s the guarani word for spiderweb, which makes sense because it kind of looks like a spiderweb. Most people just put them on tables or drape them around the house. Under a cup.

The Nanduti is a symbol of home for Anthony because of its beauty and its unique appearance. Like having an American flag in a foreign land, it is a reminder of where he comes from. Additionally, the Nanduti looks like a spiderweb because there is a myth about a young girl who found her dead beloved on the eve of their wedding covered in spiderwebs. 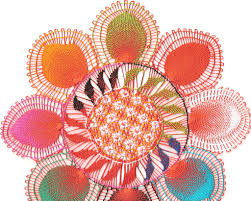