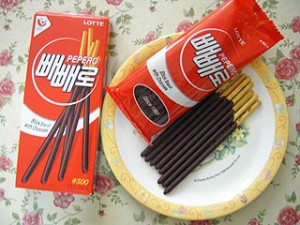 “Another, couple kind of holiday is November 11. So it’s 11 11, so it’s like four sticks. And this is kind of uh related to uh a popular snack called Pepero, which is like this long bread, like cracker covered with chocolate. And, usually like lovers and couples would either make it or buy a ton of it and give them to each other. And for little children in elementary school who don’t really have like girlfriends and boyfriends, they would give each other like lollipops or like little candies to like celebrate young Valentine’s Day.”

Context: According to the informant, the holiday is massive in Korea, but not as popular among Korean Americans in the States. He says, however, that people still observe the holiday here, and that when he was a kid they “kind of did Pepero day.”

Analysis: Although the holiday, like Valentine’s Day, was created by a corporation in order to increase sales, it has been taken over by the people, who make the day their own and celebrate it in a variety of ways. The holiday can also be analyzed in light of many other traditions discussed in class: using a Freudian lens. The four sticks of 11/11, represented by the Pepero sticks, are themselves phallic symbols. In exchanging these phallic symbols, what the holiday is doing (whether or not this is conscious) is celebrating sexual maturity, the ability to reproduce. The informant later clarified that the holiday is mostly observed by young people and couples. This makes sense in light of what has been discussed. The holiday is only celebrated by those who are capable of reproduction, so it seems. Old people seem to be excluded from this holiday as well as young children, who the informant says share “little candies,” marking their inability to fully participate in the practice of exchanging the Pepero sticks.