Every year before Diwali, the informant’s father, M, conducts a tradition where he honors the goddess Lakshmi for the wealth and prosperity that he has received throughout the year. The tradition is at once meant to thank her for past blessings and to ask for for more as the next year approaches. The tradition demands that some money be laid out purely as offering to the Lakshmi and can not be touched for the entire year. A book of prayers is also read from. The image attached depicts a standard setup for such a tradition. 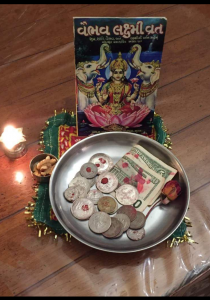 My thoughts: The interviewer used to take part in this ceremony and remembers it as a very regimented tradition. Certain rules must be followed at all times, and the marking of money to be set aside for the goddess is strict in kind and in variety.