You must put up your Christmas lights and decorations Thanksgiving weekend and they must be taken down New Years weekend.

The subjects street is known as Christmas Street to the city and is a stop on the Phoenix Light Tour during the holidays for tourists. It received this name because everyone on the street goes all out to decorate for the holiday season. Simple strands of Christmas lights are not accepted, his street has mini ferris wheels, a Candyland-themed house, a Disney character themed house, and many more. The neighborhood is very close knit and takes immense pride in celebrating the holiday season together and with the community. The Christmas Street ritual is taken very seriously, with the neighbors often giving free sets of Christmas lights to the new neighbors , as well as showing them a video of the street so they know what they are getting themselves into. The subject feels that the ritual of when to put up and when to take down the lights came to be after a bunch of neighbors got together to talk about the holidays. The Christmas street phenomenon was born then and there. He says that this ritual is even expected of the visitors, as crowds of people start to walk the street the day after thanksgiving and are disappointed when the entire street is not at its known magnificence.

I think that this ritual reflects making the Christmas season as long as possible, so as soon as thanksgiving is done, the lights go up and are not taken down until the next big holiday, New Years.  This custom is followed by a lot of people, since Christmas has transformed into a season, with holiday music playing on the radio at this time and Christmas decorations up in the malls around this time as well. I think its interesting the way American culture has transformed this holiday into a plethora of festivities, this subjects street is a perfect example. Pictures of the street are attached. 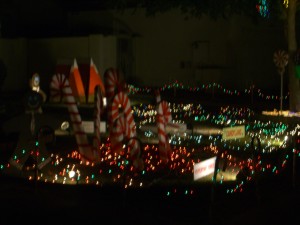 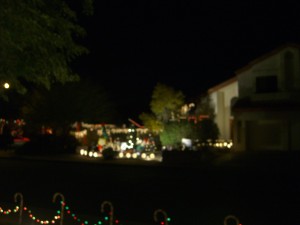