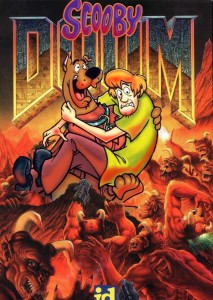 This particular post shows an early a classic image of cartoon characters Scooby-Doo & Shaggy, superimposed over popular 1993 video game Doom. Scooby-Doo was popular for children growing up in the 1990’s who would eventually go on to play these early computer games. By combining the two popular 1990’s mediums of entertainment, this satirical image is aimed to evoke nostalgia for people who grew up in this era. Further, the contrast in the subject matter of Doom (a violent shooter), and Scooby Doo (a children’s cartoon) is funny.