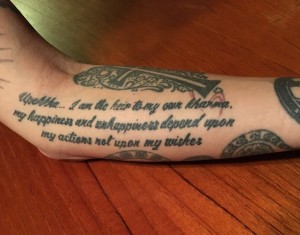 “I am the heir to my own kharma, my happiness and unhappiness depend upon my actions not upon my wishes.”

Informant (J.H.), my mother, is a 50 year old Buddhist meditation teacher from Los Angeles. J.H. identifies as biracial, with both African and Southern European heritage. I interviewed her after stopping by for dinner one Monday evening. J.H. had a traditional roman Catholic upbringing, and has been studying meditation for 15 years. I asked J.H. for her favorite quotes from the Buddhist practice. One quote that stood out was the one on J.H.’s arm. J.H. was hesitant by my classifying it as a ‘proverb’ due to the word’s Christian connotation in American culture, so I explained the folkloristic definition for clarification.

J,H,: “Upekkha, means equanimity in Pali. ‘I am the heir to my own kharma, my happiness and unhappiness depend upon my actions not upon my wishes.’ It kind of goes back to… how I speak, think and act will directly affect my life. I remember very specifically, I was on retreat, and I was having very obsessive thoughts about the same thing over and over again, and it was… filling my mind. And when I realized that I could literally focus on not thinking those thoughts I could change the course of my next mind moment. It’s a Buddhist-Pali phrase. Upekkha is one of the four Brahmaviharas, which means the divine abodes. The other three are compassion (karuna), loving kindness (metta), and mudita (sympathetic joy).”

J.H. seems to find meaning in the most ancient aspects of Buddhism, as Pali was the language spoken during the time of the Buddha. Further, J.H. has many tattoos symbolizing important phases of her life. The importance of Upekkha, or equanimity, to J.H. is evident in her permanent reminder to harness the ability to not think particular thoughts. Mastering the business of the mind is a central teaching in among all branches of Buddhism, and this particular proverb surrounding equanimity is well known, often used in meditation surrounding acceptance. As a teacher, J.H. speaks fluently and openly about the history and philosophies of Buddhism in general as well as her particular Sangha, or group.