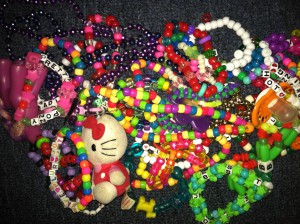 My informant was in her first year of college when a friend asked her if she would like to go to rave. She attends college in southern California where there is a large amount of raves held. A rave is a concert where multiple DJs play predominantly techno, electronic, trance, and house music. A whole rave culture developed out of the way the music makes one feel and the drug culture attached to it. Ecstasy, is the most commonly used drug at a rave and is known for its euphoric effects. In this euphoria, users created many rituals that made the drug trip even more potent and exciting.

One such ritual is called PLUR, used for the trading of rave bracelets called candy. My informant was taught that the week, up to a day before the actual rave, you make candy. Candy are brightly colored, beaded bracelets, often with words or phrases on them in letter beads. At the rave, you wear all the candy you made on your arms and perform the ritual throughout the night.

PLUR stands for Peace, Love, Unity, Respect. The two participants stand facing each other. They then extend the arm from which they are trading the candy from towards the other person. Simultaneously, the participants make the peace sign with the outstretched hand and touch the tips of their fingers together, this stands for “Peace”. Next they both form a half a heart with their hands and form a full heart together, “Love”. Next they touch hands, palm to palm, “Unity”. Lastly they interlock fingers, standing for “Respect”. While going through the motions, they say each word that the motion symbolizes. After they have said “Respect”, one at a time, with their free hand, select the bracelet they are going to trade, slide it down their arm and over their clasped hands onto the other’s wrist/arm. Usually both participants give a piece of candy or you can just give a pice away. The goal is to trade with as many people as you can throughout the night. This is a way to meet as many people as you can and spread the message of PLUR, while leaving the other person a memento of the candy.

She was taught this by her “ravemother.” A rave-mother is the person who teaches one the ways of raving. They give their trainee their first piece of candy through their first PLUR ritual, and give them a rave name.

This ritual is usually done soley at raves, however, when wearing candy, with a willing other, one can do PLUR whenever and wherever. For example, we were at a rock concert together and some guy came up to us who saw she was wearing candy and on the spot asked to trade.

The rave setting is based on a group mentality, where participating in the rituals makes the culture much more than it appears. It is not just a concert to those who follow the traditions and keep them alive. This is what PLUR is, it developed through the desire to share, to touch, and to express one’s happiness with the people one is with in that moment. It is a ritual of spreading good will and good feelings to enhance the euphoria, to transcend to a new level, through the combination of mind altering drugs and music in a setting where others are looking for the exact same experience.