*Below was in the e-mail*

Subject: The Passover Toilet Seat – Isn’t this the refined Passover gift for which you’ve been waiting? 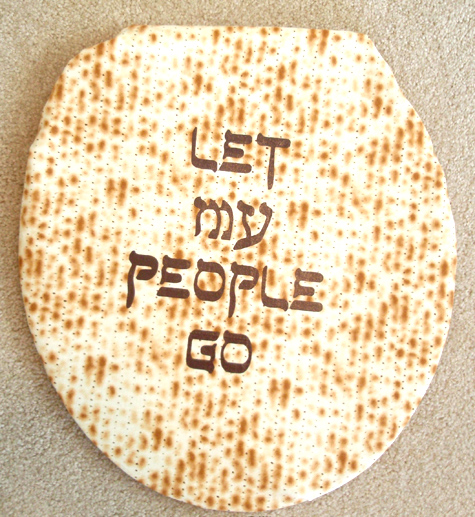 I received this chain e-mail, just recently around the Jewish holiday, Passover.  The initial email had been forwarded and sent to hundreds of people.  What is funny is that another Jewish friend of mine sent me the exact same e-mail and she does not even know the first person who sent this to me.  In fact one woman is from Dallas and the other woman is from Arizona.  I thought the image [above] was pretty funny, even though I usually just delete chain e-mails.  I didnt forward the email to anyone else cause, thats just something I dont do.  The toilet seat cover is designed to look like matzo and the phrase Let my people go is the phrase Moses used to demand freedom from Pharaoh of Egypt.  Obviously this is a play on words referring to releasing your bowels or letting them go.

Chain e-mails have become a very modern form of folklore.  It is almost impossible to trace an original source to this e-mail, and it is an artistic means of communication between people.  In this case the folk are Jews and the lore is Passover, specifically Passover jokes.  What is interesting is that Susan received this identical email from two people located in completely different places across the country.  The picture itself is a folk joke, and it has cultural meaning behind it, as Susan mentioned the story of Moses demanding his people to be let go from Pharaohs command.  It is also interesting to note how many chain e-mails go around a day.  Susan mentioned how she gets so many chain e-mails that she just deletes them because there is too many to go through.  This is also a seasonal chain email because if this were sent out in July, it would not be as funny, but in the context of Passover season, it is appropriate.