Apart from being found on the sides of ships, the term “Kilroy was here” has also been found as graffiti on walls, bathroom stalls, sidewalks, etc. The term is thought to have come into existence in the early 1930s and was a part of popular culture up until the late 1940s.

The phrase is thought to be a combination of several pop. culture phenomenons happening throughout the second World War. The phrase “Kilroy was here” is believed to come from a southern shipbuilder who used the term to check off parts of a ship as they passed through inspection. This account would specify how this graffiti made it into areas of a ship that no other crew member would have had access to.

As GIs and soldiers made their way into and across Europe, the phrase is thought to have traveled with the Americans and combined with the English cartoon of “Chad”. The resulting combination of the cartoon man peeking over the wall and the phrase “Kilroy was here” was then found scribbled across Western Europe and even made it’s way into Russia near the conclusion of the War.

During this time, Australia also had a similar term being used that said “Foo was here”. All forms are though to relate to each other in someway and be replicas of each other since there is no definitive answer to the terms origin.

My grandfather learned about the phrase from serving in the military himself and from living through the events of the second World War. My grandfather does not know the exact origin of the story, but claims that the true inception of the phrase comes from southern ship yards. He said that infantry men used the term as a way of marking their travels and conquests throughout Europe. 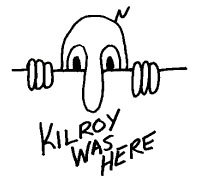 For additional history behind this phrase, see: