My friend from Paraguay has a lot of folklore about the seven Guarani monsters and the legends behind them. The Kurupi was the strangest of all the seven that he told me about.

Friend: “There are several Guarani monsters I learned about growing up in Paraguay. One of them is the Kurupi, a weird gremlin-like dude with a really long penis. I think he represents the spirit of fertility or something. ”

Me: Were there any stories about him?

Friend:  “Yes. In ‘the old days’ a lot of people would say (if they had an unwanted pregnancy) that Kurupi had impregnated them without even entering their home. For example, if you were a single woman or if you had cheated on your husband and didn’t want to get into trouble, you would blame it on Kurupi. His penis is so long that he can go through windows and doors in the night. There are also a lot of stories about the Kurupi taking young women and raping them.”

Me: Did you ever believe the stories?

Friend: “No, I never really believed in the Kurupi. Mostly he’s just a funny little demon that we’d laugh about in grade school.”

Analysis: The Kurupi is certainly the strangest looking creature I’ve ever seen. Besides the initial hilarity of his appearance, the tale of the Kurupi is creative and disturbing. In a place and time where modern medicine cannot explain pregnancies and sex, legends will replace science. This is a clear example where women would become pregnant (by someone other than their intended) and the only way to protect their virtue would be to blame it on the Kurupi. In many ways, belief in a creature like this can settle marital disputes before they even arise. Additionally, however, the Kurupi could have taken the blame for many rape incidents– when a real person was the perpetrator. 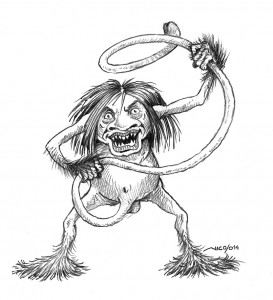 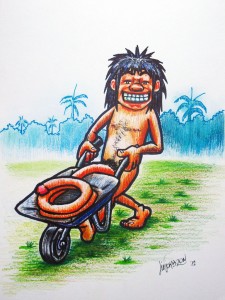