“During my college years in the mid 80’s I was a member of a ‘Tuna” group in Spain. A “Tuna” is a group of university or college students who dress in traditional costumes and play traditional instruments and sing serenades. In essence the tradition of this student tuna band or ensembles seems to go back to the 13th century as reflected in some of the medieval literature. That’s how we know the 13th century part because some of the literature alludes to these roaming student ensembles who would play music largely to earn money. They would sing and in some place they were known as “sopantes” de “sopa” (soup). Like soup kitchens that we have here; people would feed them for free. So sometimes they were known as “sopantes.” So this tradition of these student ensembles was typical of Spain and Portugal and it made its way even to the Americas through Spain. So in Mexico and Peru and all of these countries that were part of the Spanish empire, when the Spanish came and founded their universities here. In 1551 Emperor Charles V granted the charter which established the university of San Marcos in Lima, Peru to other old universities like Mexico City and Santo Domingo. So the tradition spread into the countries of the Americas that way. Today this tradition has even spread into the Netherlands as well. Over time the original purpose of these ensembles disappeared. The students weren’t doing these serenades to get money, largely but it became established as a venerable tradition on university campuses. And like by the 19th century already they were established as a cultural activity or enterprise on campuses. It was now sponsored on the campuses like a club or a school marching band. And membership was through trial; you had to pass. Not only music but pranks and stuff too. All of these things were involved in being admitted into “Le Tuna.” Now the tradition is that each school like Medicine, Architecture, Humanities, Law, you know all of these, have their own. And the colors are set for each field or discipline. I think Medicine is yellow. Basic science is usually royal blue. But there’s green and red. So no matter if it’s from different universities, the schools have the same colors. The costumes are kind of old fashioned and reminiscent of Renaissance, 16th century. So the costumes include a cloak, a ‘dublet,’ which is a tight fitting jacket almost like a bolero jacket that goes on top of a white shirt that has big cuffs and collar, they are like puffy. And then the pants are called petticoat britches, Spanish britches that are fitted right under the knee. And then there’s tights, stockings and also pointy black shoes and the most important thing is the so called “beca.” The “beca” is a V-shaped band that goes over the shoulders and on top of the jacket. The color of it is characteristic of the field. And then on top of everything you wear a big, long cloak, typical of the 16th century. Each ‘tuno,’ pins ribbons of different colors and seals or coat of arms patches that are sewn on of all of the cities and countries that the group has played in. The ribbons are usually given by girls to the “tuno.” But the seals or the coat of arms from places are collected through the traveling. So the amount of ribbons and patches on the cloak tells you already about the ensemble member. Those that are seasoned will have their cloaks nearly covered with patches. And those who are more popular with girls with have more ribbons *chuckles*.  Traditionally, the girl who gives the ribbon would embroider messages onto them for example, “para el tuno mas simpatico” (for the most charming tuno)  or “para el tuno mas guapo” (for the most handsome tuno).  Mothers, aunts, grandmothers and sweethearts would give the ribbons.

The instruments consist of typical Spanish guitars, but also combine other traditional string instruments like “el laud” y “la banduria” and also, very typically tambourines. The tambourines are the quintessential ‘Tuna’ instrument. Also some “Tuna’s” use accordions. Ive’ seen on television that Mexican “Tuna’s” have incorporated the typical Mexican, “guitarron.”

There is not agreement as to the origin of the name. Some trace it to the King of Tunis in north Africa. The tradition says that there might have been a “King Tunez” who was very fond of music and was sort of a vagabond and would like to walk around the streets playing and singing. So apparently sometime in the middle ages or the Renessaince the term “you’re a king of Tunis” would be given to the leader of an itinerant band.  But most people think it comes from the Spanish word “tunante” which is almost like a villain, a rogue but you can also use it with children like in English when we say “you little scamp.” “Tunante” has the connotation of mischievous yet playful, not necessarily malicious because we use it often with children.  From the word “tunante” could have evolved the word “tuno.” So the group of “tunos” became “La Tuna,” the band of “tunos.” But nobody really knows for sure.

They play lots of traditional “folk” music. Many of the songs are “tuna” folk songs but also many others are just other traditional songs that the play in their serenades. In modern times, “tunos” incorporate some more modern, popular music. One of the most typical songs in any ‘tunas’ repertoire is “La Compostelana.” It’s a song named after the “Tuna Compostelana.” Compostelana comes from Santiago de Compostela.  Which is the city of Saint James in northern Spain that has one of the best known and well established universities in Spain, founded in 1495. So this song that every ‘tuna’ plays has a line that says “Que cada cinta que adorna mi capa guarda un trocito de corazon.” Which means: every ribbon that decorates my cloak, holds a piece of heart. So that’s where the idea of the ribbon comes from.

It’s interesting that today in modern, recent times the ‘tunas’ have nearly regained or gone back to the idea of playing to earn money. Because now it’s not uncommon that they are hired by people for institutions or special events, such as weddings or other celebrations and even special events. For example when there are foreign dignitaries that come to Spain or for conventions to serenade visitors. While I was “tuno” we got hired to do two weddings. I was kind of like the ‘buffoon’ of the group. I would be the one cracking all the jokes and had the tambourine. I was directly engaging the audiences. The lead of the group is the one who introduces the band, cracks jokes, talks with the audience, with the girls, does acrobatic jumps and throws the tambourine around. ”

Can you tell me about some of the initiation processes or pranks you mentioned?:

“The selection process when someone wants to be a part of the ‘tuna’ starts with musical skills. Do you know how to play an instrument? Can you sing reasonably? There’s also usually tests to see if the person is shy and able to be out late at night and interacting with audiences. They’re not usually cruel though. Like standing out on the street in your underwear. Or asking a guy to take a ‘clavel,’ a carnation and profess your love to a random girl. Or to play out in the street and ask people to put money in your hat. These tests were kind of embarrassing but not meant to be overly cruel, more to test for an outgoing personality of a member. Oh and I forgot to tell you, some of the bigger groups take summer tours. Some of them have lots of prestige and are like institutions and go on tours abroad or just in Spain. ”

So the group didn’t only sing songs, there was dancing and performance involved?

“Yes, at a certain point the “tunos” get girls from the audience to dance. They play paso dobles and take women out to dance with them. Sometimes it’s in auditoriums but others it’s out in the street or they might go to an airport or something.” 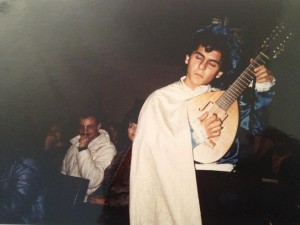 I had seen this picture of my dad before and knew it was from his days of being a “tuno.” But I didn’t have anymore details than that. It was really fun for me to hear about my dad’s memories from college, right about when he was my age. It appears that this tradition in Spanish universities is similar to the American college tradition of fraternities. In both they form a close group and have some forms of initiations, but the ‘Tuna” has a musical and performance aspect that the fraternities lack. As his daughter I only get to see tidbits of his humor, but knowing that he played the lead of the group and/or buffoon makes absolute sense. It was also entertaining for me to watch him giggle when he started explaining the interactions “La Tuna” would have with women. It was my impression that he was popular with the ladies, although he didn’t explicitly admit that.
Here is another explanation of the “Tuna” tradition: http://www.donquijote.org/culture/spain/society/customs/tuna.asp