In the following quote, the informant describes an outing where he visited a “maison de sucre” known, as a sugar house in English, and ate traditional French Canadian foods.

Informant:  “One night in well essentially it’s in Quebec they call it la maison de sucre, and they make maple syrup from the tree sap. Usually, you go and ride snow mobiles to go out there. So, out in this far away place, you can’t get there with a car, there are all of these people and they are making food. In the middle of the night you go over there and you get breakfast, this special kind of French Canadian breakfast. It’s in the middle of the night and well everybody’s drunk and it’s crazy. And they had a couple of different foods that I had never heard of, one of which was “les oreilles de Christ,” or “the ears of Christ,” and what they were, were chunks of fatback that were fried and then they would curl up like an ear, and they were fabulous, (some disgusted faces from the audience at the dinner table) no, no it was like bacon from heaven.”

The informant lived in Montreal when he was around 25 or 26. During this time, he met several French Canadians who told him about and shared various traditions with him. On one occasion, as described in the conversation selection, the informant traveled late at night on a snow mobile to visit a “maison de sucre” with his wife and his French Canadian friend. The “maison de sucre” or “cabane à sucre” is also known as a “sugar house,” “sap house,” “sugar shack,” “sugar shanty,” or “sugar cabin” in English. These small cabins or series of cabins, are usually located on the property of someone who has a lot of land, typically a farmer with “a lot of maple trees.” The purpose of these cabins is to collect sap from sugar maple trees and boil it into maple syrup, which produce sap during the period between October and early April. Sometimes, the sugar house would serve breakfast foods late at night to people in the surrounding community who knew about it and could get there. The breakfast foods would all be accompanied with maple syrup, and would include foods like ham, bacon, sausages, baked beans, scrambled eggs, and pancakes, along with more uniquely French Canadian dishes like “les oreilles de Christ.” As stated by the informant, this food is not very difficult to make as it is just slices of fatback, smoked pork jowls, or salt pork that has been fried until it curls and becomes a golden brown color. Personally, the informant does not make this food, although he fondly remembers eating it. The informant also said that these houses are usually small traditional family run businesses, though there are some large commercially operated ones.

These houses are popular places to go during the winter and spring. Although, sometimes these cabins do not open until spring because if the temperature drops below zero it is very difficult to collect sap. Thus, sometimes the sugar shacks and traditional foods served with maple syrup are associated with Easter and other springtime festivities.

According to the informant, the English translation of this food is called the “Ears of Christ,”  “oreilles in French means ears, and Christ in French means what it looks like.” Phrases similar to this are not uncommon in French Canada because many curse words are terms that refer to Catholicism and the Catholic Church. According to the informant, this is because in the early 19th century these was a strict social control of the French Canadian people by the Catholic Church. Thus, words that referred to God were not supposed to be said because they were sacred. Originally taboo, these words eventually were used to vent frustration and began to transform into profane words. In fact, I have heard the informant use words like baptême (baptism), câlice (chalice), crisse (Christ), tabarnak (tabernacle) in anger. Thus, calling the food “les oreilles de Christ” would have been somewhat ironic and humorous. However, while looking into the meaning of “les oreilles de Christ,” I found there is another interpretation about the origins of this name. Apparently, “Christ” in French sounds like “crisser,” which means to squeak, squeal or grate, so “crisse” could have been used to refer to the sound the food makes as it fries as well as the sound the crunchy chips make as you eat them.

I think that this language background is very apparent in the name of this foodway and adds another meaning to it in French Canadian culture. Moreover, this food is popular in small shacks that cater to a younger audience and would be an appropo food (with its name) to serve there. 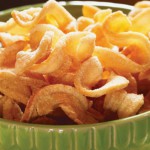