Interviewer: So why do you celebrate Guy Fawkes Night?

Informant: It was a big part of my childhood. I remember going to Bonfire Night Parties. So the month prior to the 5th of November, the actual date, families and friends would gather old furniture and sweep up leaves, a lot of fallen leaves, and anything else that could be burned. And we would stack it into a huge bonfire. And then on the night of the 5th of November the community would come together and there would be fireworks and we would light the bonfire. But also during the month prior children would build a ‘Guy’ and a ‘Guy’ consisted of old clothes, that were stitched or pinned together and stuffed with newspaper and leaves to resemble a person. The ‘Guy’. Guy Fawkes. This ‘Guy’ would be carried around the community in a wheelbarrow or old pram, going door to door begging for pennies. “Penny for the Guy”. These children would then take these pennies and purchase fireworks.

Informant: I know! I was wuss and I hated loud fireworks, so I always purchased sparklers. There was always traditional food served at bonfire night parties: mugs of soup, oxtail, or tomato soup, and sticky Parkin Cake (Ginger cake). Adults always lit the fireworks and the bonfire, but you could throw things on the fire, basically we were pyromaniacs for a night and it was socially acceptable. Another thing that was a tradition, the dummy you made, you would always put a mask on it of a political figure. Typically one you disliked. Part of my memory of the thing, is that you stood as close as you could to the fire so your face was almost blistering and your back was wet and freezing, cuz this is England! Guy Fawkes night was THE THING for us, Halloween was ‘eh’ but Bonfire Night was it, cuz it had fire!

Context: An earlier conversation that was discussing a different English Tradition made my informant remember this part of her childhood.

Background: The informant learned the tradition from her community, there was no one person who taught her about it. She enjoys it because it’s fun. “It only gets remembered if it’s fun”. To her it’s a little “encapsulated perfection” part of her childhood and it captured what it was like to grow up in rural England.

Thoughts: It sounds like a very interesting holiday, the informant seemed to go back to the high energy and joy of that holiday. I personally wish to be able to go to her home town to see this tradition myself.

The informant is a 29-year-old Caucasian female who will be called JH. She is of Irish and English descent and knows of this folklore from her family, more specifically her father. This folklore piece is told in her words:

“My dad (who is half British and half American) used to tell us about Guy Fawkes Day. The 5th of November was a day where a poor man tried to erase the class system via blowing up the house of Parliament. He was caught, hanged, and burned for his crimes. Every year, British people not only burn effigies of straw men in celebration of saving parliament, but you’re supposed to also burn bad habits. Basically, we were told this was getting rid of the bad, or the “treasons” in your life.”

JH was told about the folklore on Guy Fawkes Day by her father as she didn’t know the story behind the celebration. She celebrates it with her family since her father’s side is British, although she isn’t religious. She appreciates celebrating the day because it is something she can do with her family.

Guy Fawkes Day is celebrated in commemoration of the failure of the “Gunpowder Plot” of 1605. This involved a group of Roman Catholic conspirators led by a man named Robert Catesby. They were upset by King James I refusing to grant religious tolerance to Catholics. The goal was to reestablish Catholic rule in England by killing the king and members of parliament. It is sometimes referred to as Bonfire Night and many people celebrate by making bonfires or setting of fireworks. I had not heard about this holiday prior to being told it by JH. It’s a very interesting thing to celebrate and how it is celebrated is interesting as well. I feel like these now; the day has become more of a cause to get together with family and friends to drink and eat together. Much like Saint Patrick’s Day, where it is celebrated by many people who have no real connection to the day.

Because this was my only non-American informant, I was particularly interested in customs or holidays specific to England. My informant had vivid memories of Guy Fawkes Day/Night through the lens of a child.

So, the fifth of November is a big deal in the U.K. It’s Guy Fawkes Day. Basically what we do is, we all gang together — gang together and we’ll, uh, go to the bonfire. Beforehand, sometimes you’ll have like a meal or something, you’ll get together, have drinks, etcetera. But basically the highlight of the evening is going to watch Guy Fawkes burn on this big bonfire. Usually we’d go to our local park — my local park was Battersea Park, in case you cared — and there’d just be like, a massive — well, it seemed massive to like, a ten year old — a big bonfire. Guy Fawkes was, of course, on top. The fun thing for us kids is that they used to sell these light-saber, light-up glow-stick-y things like you’d see in your American Fourth of July, um, and it’d just be a fun way to like, hang out with the kids and stuff. Celebrate a bit of history. 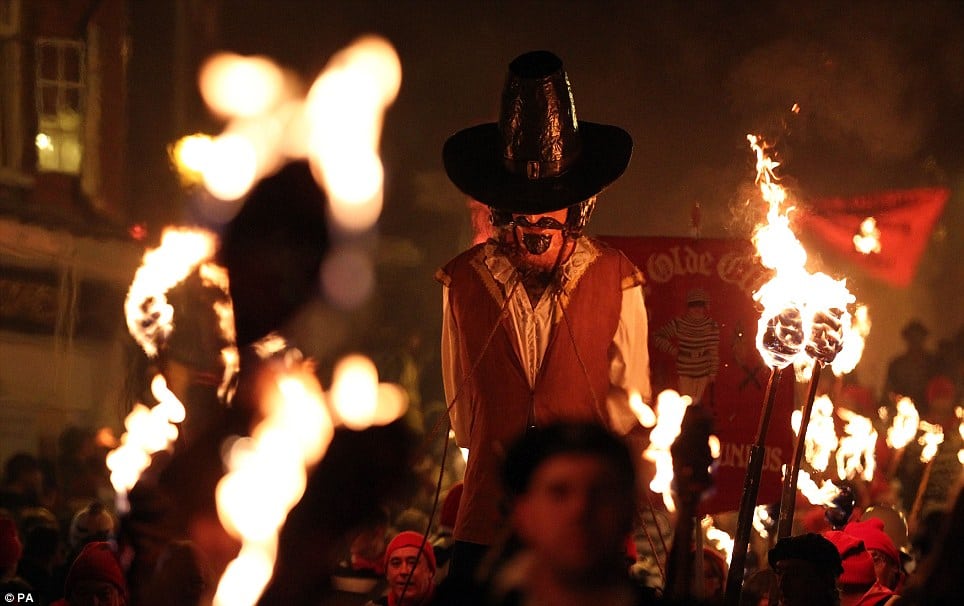 While I vaguely recalled the story of Guy Fawkes and the November Plot, I knew little of how it is commemorated in England. I was surprised and a little shocked to learn of the effigy burning — it seems a bit barbaric and nationalistic for a widely-celebrated holiday. The account of communal gathering, fun light-up novelties and bonfires demonstrates how little such historically-based holidays really have to do with the actual historic events which inspire them, and the often upsetting or controversial meanings behind those. To my informant, as a child, it was simply a fun holiday, much like our fireworks and barbecue on the Fourth of July. I was able to learn more about the origins and evolution of Guy Fawkes Day in James Sharpe’s book Remember Remember: A Cultural History of Guy Fawkes Day.

Informant: Valerie is a 61-year-old, born and raised in Dorking, England. She moved to Pennsylvania at 40, and to San Diego at 45. She still regularly visits England, where all her family still live.

Main Piece: “Back when I lived in England, we would celebrate Bonfire Night every 5th of November. Every Bonfire Night when I was growing up, my family would go out to the center of town and there’d be a big celebration. It was all about remembering Guy Fawkes and the Gunpowder Plot and celebrating that he was caught. We’d set off fireworks and burn an effigy of him, and have a big…almost a party, with loads of food. Kids would go around dragging big…scarecrows dressed like Guy Fawkes. It was very important to my mum.”

Background Information about the Performance: The Gunpowder Plot was an attempt by Guy Fawkes at destabilizing the British Government in the 1600s. Bonfire Night celebrates the fact that he was caught before the Plot was executed. For the informant, she remembers this piece because of how important it was to her family at the time. The informant still celebrates Bonfire Night in San Diego by cooking a special meal that night.

Context of Performance: The piece was performed annually on the anniversary of the Gunpowder Plot.

Thoughts: Upon further research, I have found that the celebration of Bonfire Night has dwindled significantly since the time the informant lived in England. However, she continues the tradition, although in a much more subdued manner, in the United States.

Informant was a 19 year old female who was born in England and currently lives in Los Angeles. She lives in my hall, and I interviewed her.

Informant: So in 1605, this dude called Guy Fawkes was arrested trying to blow up the house of parliament in London, and it was likeI’m pretty sure the king and all of the important people were there, and he was trying to kill them, but he got caught and that was on the 5th of November. So every year, on the 5th of November, like schools and families and like clubs and stuff in England make a huge bonfire, and then they make like a doll, like a human sized figure of Guy Fawkes, and then they burn him on the bonfire, and there’s like fireworks and like a barbecue and stuff, every year.

Collector: So you celebrate him or him not blowing up the parliament?

Informant: Well, we burn him every year, so we definitely don’t celebrate him. It’s like a celebration of I guess his failure. It’s a very chill day though, we eat burgers and hot dogs and hang around by the bonfire. Like we don’t have a meal with our family. It’s more like the whole community gets together and there’s like fireworks and stuff. There’s a song too.

Collector: A song? What is it?

Remember, remember the 5th of November

I see no reason why gunpowder treason

Would ever be forgot

It’s not that big of a deal though, like we don’t sing it around the campfire or anything. It’s just something that people know.

I thought this was particularly interesting because it’s a holiday that revolves around an attempter murder. Albeit the burning of the figure of this murder, but a murder none the less. I think it’s cool how even until today, people remember it, and I think that this might be because the monarchy in England is still in power. I believe that this is not only a fun way for people to celebrate with their family and friends, but also a way to honor their monarchy. It makes me wonder if the holiday began as a way for the monarchy to keep its citizens in line, so that nobody would try to recreate Guy Fawkes’ murder attempts.