“So a week before Easter–before and on Palm Sunday–we got to the church and bless willow branches. We tap the branches on each member of the family, and say, ‘the branch is hitting you, not me, and a week from today is Easter.’ After this, the willow branches are placed over the icons in the household.”

Context: The informant, TH, is a second-generation Ukrainian-American living in Rhode Island. She lives with her parents, along with her maternal grandparents. TH and I were discussing her Easter plans for this year, and she brought up how she had to go to church one week before the actual Easter date. I asked her why she was going to church, and she explained her Palm Sunday tradition that her and her family partake in. For TH, this ritual has importance because it is a very particular and specific religious custom that her family participates in, and they have been doing it for as long as she can remember. The tradition was also a fun one according to TH due to the fact that she and her siblings would chase each other around their house and hit each other with the branches, much to their parents’ chagrin.

Analysis: Religious traditions vary among various different groups and factions within each religion. Not every Christian participates in the same particular traditions that pertain to each major holiday, though most Christians do partake in Easter celebrations. For example, the act of blessing willow branches and placing them over the icons in the house is not something that Roman Catholics would partake in, but rather is quite specific to Eastern European Orthodox observers. There is a very important reason for this disparity between how Christians celebrate Palm Sunday in western Europe or the Middle East and eastern European factions will celebrate the holiday. Palm Sunday is supposed to mark the day that Jesus Christ, the son of God, returns to Jerusalem to celebrate Passover following his visit to Bethany–at least this is how it was written in the Bible. Upon his return, Jesus’s apostles and supporters laid their cloaks and palm branches down to show their faith. Palm Sunday celebrations around the world usually involve blessing palm branches and building crucifixes out of the plant to commemorate the triumphant return of Jesus Christ. However, in Eastern Europe, it is difficult to obtain palm branches so far north, so the tradition was altered slightly, by replacing palm branches with willow, or more specifically pussy willow. This plant is endemic to northern Europe, so it was easier to use it.

Another important aspect of this religious tradition is the way that children remember the tradition. For TH, the tradition was less about the religious significance–while that was important–but more about the memories she had involving the custom. It was something fun that she and her sibling would look forward to and it brought them joy during a strictly religious and stoic festival. 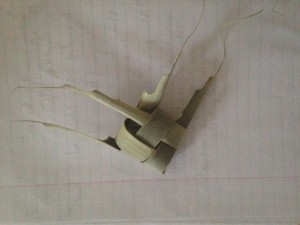 I was wandering down the main street of Lahaina, HI, when I saw two people weaving coconut palm fronds into fish, roses, and a couple of other designs. I stopped and asked the young woman about palm frond weaving.

Me: These are really neat. Where did you learn how to weave palm fronds?

Informant: From my friend.

Me: Where did your friend learn, and why do you do it?

Informant: He learned in the Caribbean. Apparently it was a common art form there. Here, we do it for fun, mainly. And for the tourists.

Me: Do you know how palm frond weaving originally began? And why the fish, the roses, and the crosses?

Me: Oh? That would make some sense, I suppose. Given how palm fronds are associated with Palm Sunday, I can see how weaving palms became a tradition.

Informant: Yeah. Though it is not solely a Christian tradition. It is simply associated with Easter and Palm Sunday the most, which is why most of the designs that are woven are crosses – the most recognizable symbol of Christianity, especially during Easter, doves – a symbol for peace, hope, and the Holy Spirit, and the fish – which became a symbol of Christianity during the days that Christians were persecuted by the Roman Empire.

Me: Ah. Interesting. And the roses?

Informant: That is not so much religious roots as it is more to express gratitude, or to be given to someone who has lost a loved one. You know, like how you would give flowers to someone as a gift? Palm frond roses are essentially the same.

Me: Okay. Makes sense, as roses do not have as much of a symbolism in Christianity, especially around Palm Sunday, as some of the other designs do. So how widespread is palm frond weaving?

Informant: People all over the world do it, as it has become a Christian tradition, as due to the European explorers and colonization, Christianity has been spread worldwide. Though my friend and I don’t do it so much for the religious aspects.

Me: Interesting. Well, thank you for talking with me.

Informant: You’re welcome, and I hope you do well.

I find it to be incredibly interesting that palm frond weaving has become a Christian tradition. Until this interview, I had never known of this Easter and Palm Sunday tradition. Palm Sunday celebrates the day that Jesus entered Jerusalem. As he was entering the city, the people laid palm fronds down in front of him. To me, this practice of weaving palm fronds on Palm Sunday is rather like a kind of magic – using the palm fronds at that time and weaving them into such shapes is a kind of ritual that helps to connect the practitioner with his/her faith, as Easter is the most important holiday for Christians no matter their denomination. The cross is almost like a talisman, a reminder of how Jesus was welcomed into the city and how he was betrayed and killed not a week later. The dove is often a symbol of hope and peace, such as what Christ’s resurrection offers to Christians. The fish is a reminder of the persecution that the early Christians suffered as their Messiah suffered under the Roman Empire.