Informant: Oh my god Momo, can we please not talk about Momo oh god. Momo is this like, texting game that some of my friends play at school. You know what WhatsApp is? Yeah, so like, my friends will text this number and whoever is behind it will respond and ask them to do weird stuff. Like watch a scary movie with the lights off. Apparently the number once asked some girl to kill herself. I’ve never texted it so I’m not too sure. Yeah also the photo is this absurd picture of the ugliest doll you’ve ever seen.

Interviewer: Where did you hear about Momo?

Informant: At my high school.

Interviewer: What do you make of it?

Informant: The doll is terrifying. I try to not think about it that much.

Background: The informant is a freshman in high school here in Los Angeles. He just recently moved from Woodstock, NY, so I asked him if he’s learned about anything new since he started at a new school. This interview was recorded and I got his father to sign his release form.

Context: I had previously heard of the internet phenomena that is Momo and wanted to get the interpretation of someone within the its target audience. After doing some research on my own I was able to learn about the backstory regarding this piece of cyberlore. Allegedly, the Momo came about from a Spanish speaking Facebook group and evolved into the mainstream when it was introduced to the US in the summer of 2018. The WhatsApp number that children text asks them to complete a series of bizarre and dangerous tasks. Momo reached a tipping point when a 12 year-old girl was found dead shortly after messaging the number. Momo is represented by the same doll every time, which I have attached below. Interestingly enough, the Momo doll wasn’t created with the intention of its current function. The Momo sculpture was created by a Japanese company that makes props for horror movies. However, the sculpture is supposedly based off of the ubume, which is supposedly the spirit of women who die in childbirth.

Analysis: As digital technology has progressed, we are now coming face to face with an entirely new subsection of folklore. These pieces of cyberlore are incredibly viral and mainly target children on the internet. Slenderman was the first of its kind and Momo is an extension upon the principles which gave Slenderman its cult following. These pieces of cyberlore speak to the effectiveness of global communication in spreading folklore. Now we are able to communicate across the globe in a manner of seconds. This kind of cyberlore, contrasted with memes, serve to shock the consumer and play on the gullible nature of younger individuals. 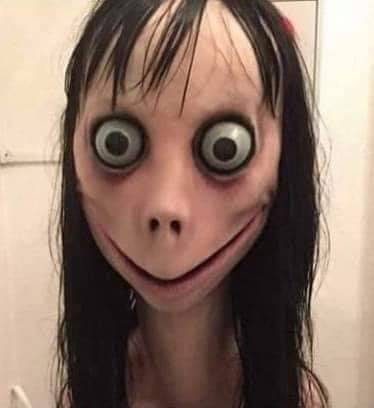