The informant uses this response whenever someone says something isn’t fair.

“Fair is where you ride rides and eat hot dogs.”

She heard the phrase from her family and continues to use it. It is employes as a snarky response to someone who has said something that annoys her using the word “fair” playing on the two meanings of the word. There seems to be a common trope of folk responses to common statements and questions. I.e. “I’m hungry.” “Hi Hungry. I’m Bob.” or “What time is it?” “Time to get a watch.” I think people enjoy displaying their cleverness through these phrases.

The informant learned this folk custom when traveling to Japan.

“Ok, so in Japan when you eat your sushi, you’re supposed to dip your fish first into the soy sauce, not the rice, because the rice is like white, and it’s supposed to be pure, when it goes into your mouth.”

She believes that it has a higher meaning for Japanese people but only practices it herself to be polite.

The informant learned this piece of folklore from her mother about how to build a house in China.

“You shouldn’t buy a house with a front door and the back door directly across from each other, because um, they say all the money is going to come in and go straight out.”

I remember hearing something about this being a concept of Feng Shui. I do not know if this custom is directly related but they are certainly correlative.

The informant is describing a piece of folklore from within the quidditch community. Quidditch is an increasingly popular sport among college students. It was originally based on the fictional sport from the harry potter novels adapted to exist without magic. The sport has now taken on a life of its own, having an official governing body in the International Quidditch Association. There is even an annual Wold Cup for the sport. This particular piece is about one of the people who runs the organization.

So, I heard about Will Hack’s broom at the World Cup V in New York. And it was during the MSU UCLA game and, where we saw Will Hack illegally, uh, doing a lot of things illegally. And… he made a girl cry! And tackled her illegally, and was being a douchebag. The whole west had a chant going that said “Will Hack’s Broom.” And this is not a new thing. Apparently, the whole United States Quidditch League knows about it. So, and then after UCLA lost to Middlebury, a bunch of USC kids, we just what? reenacted his thing across the pitch. It was fun. Basically, instead of holding his broom upright between his legs like normally you’re supposed to do… upright? sideways? I don’t know. Normally! He has the broom dragging on the floor. Where he, it almost, he almost has it coming out of his legs. So it’s almost illegal. So I feel like it’s an ineffective way of playing quidditch. Especially since he’s one of the people who wrote the rulebook. 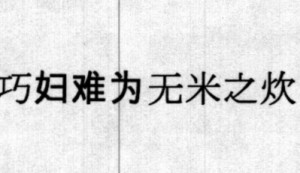 “The cleverest housewife cannot cook a meal without rice.”

He interprets it to mean that even a skillful person cannot achieve without the proper resources.

I find it interesting that the culture cannot envision a meal without rice. This speaks to just how intrinsic to the Chinese culture rice actually is.