A: “Are there any certain traditions within Lithuanian weddings? Like are there any pranks or things of that sort?”

B: “Oh yeah! So pranks…I guess at each table you have to have a songbook that has a bunch of songs, and one of the events throughout the wedding is that people can choose a song and like during the meal, they can go up to the bride and groom and sing it to them. You usually get a lot of drunk renditions of songs *laughs* but like groups will come up or solos. And there’s also… um this wedding dance that’s done where the bride and groom sit in the middle while the wedding party dance around them with um… with these woven like pieces of fabric — I have one in my room — that they hold and wrap their arms around while dancing so at the end of the dance, the bride and groom are like completely wrapped in these things, and it’s supposed to showcase their unity.”

B: “So they do that, and the name is like “Čigonai” because I guess in the olden days, they were taken over by the country and so that’s like the group that you kind of make fun of, which sounds kind of bad. *laughs* It’s like the people from the countryside or something.”

Context: It is apparent that music plays a strong role in Lithuanian culture holistically with song and dance frequently included. Further, some of these wedding traditions seem to stem from historical context including submission to another nation. Such references can be found in the attire worn by and actions performed by those who prank the couple. For example, the hat serves as a symbol to indicate the resemblance to the other foreign group. Further, the woven fabric, another folk object, takes on the symbolic meaning of unity.

Interpretation: Practical jokes are common in weddings throughout many cultures. Often, the individual at the expense of the joke is going through a rite of passage. In this case, marriage is the rite of passage, in which the couple is progressing to something greater. Further, the hats worn by the prankers may be an example of “blason populaire” as it draws from a stereotype.

A: “What is the significance of flower crowns or flower accessories within the culture?”

B: “Yeah so in weddings, the bride wears “Vainikai” which are kind of like flower crowns at the party afterwards which the bridesmaids make. Also, so um the national outfit that we have is really big on wool and stuff like that, but it started out with a flower crown on top because I guess… um back when it was like a little country in the countryside, the only thing that they could find to decorate their hair was flowers so they would pin them together. And now what you wear — you can’t really dance with flowers in your hair — so now what you wear is this crown that has fake flowers on it, and it’s supposed to symbolize that of the past. But for song festivals and weddings, you wear actual flowers in your hair. And for weddings, the bridesmaids make the crowns for everybody.”

Context: Flower accessories are worn in various scenarios throughout Lithuania, as it is a component of the nation’s traditional outfit. Further, the accessory is worn both casually and formally. Sometimes, the Vainikai are made from real flowers while others are artificial. Also, the occasion determines who makes the Vainikai.

A: “Have you had any weird experiences? Something out of the ordinary? Or do you know of an unusual story?”

B: “My cat was overtaken by a bulldog. *laughs* So my cat was acting really weird for a few months, so my mom’s friend suggested that we call this cat doctor. I don’t know why, but my mom was like ‘Okay.’ So we called her, and she basically talked to my cat over the phone, and after awhile she said that ‘Your cat’s soul has been overtaken by a bulldog. A bulldog has died in your house, and it’s soul has taken over your cat’s.’ And after that, she talked and coaxed it out of my cat. So then, we contacted the former owner’s of the house, and a bulldog really did die in our house. It’s kind of weird. I don’t know if I believe it.”

Interpretation: The informant does not explicitly state that a ghost was involved in the dog’s shift in behavior. However, her reference to some sort of unusual spirit alludes to a folk belief in the possession of a soul. Ghosts and spiritual legends usually fall into the folklore category: legends. This is an example of animal folklore and legend. Further, the story alludes to a folk belief in spirits or souls after life.

Interpretation: Folklore can link individuals to completely different people, customs, beliefs, and more. This linkage has become increasingly apparent with the rise of the internet and easy access to people around the world. In this case, the recipe links the informant to a different culture within the United States. 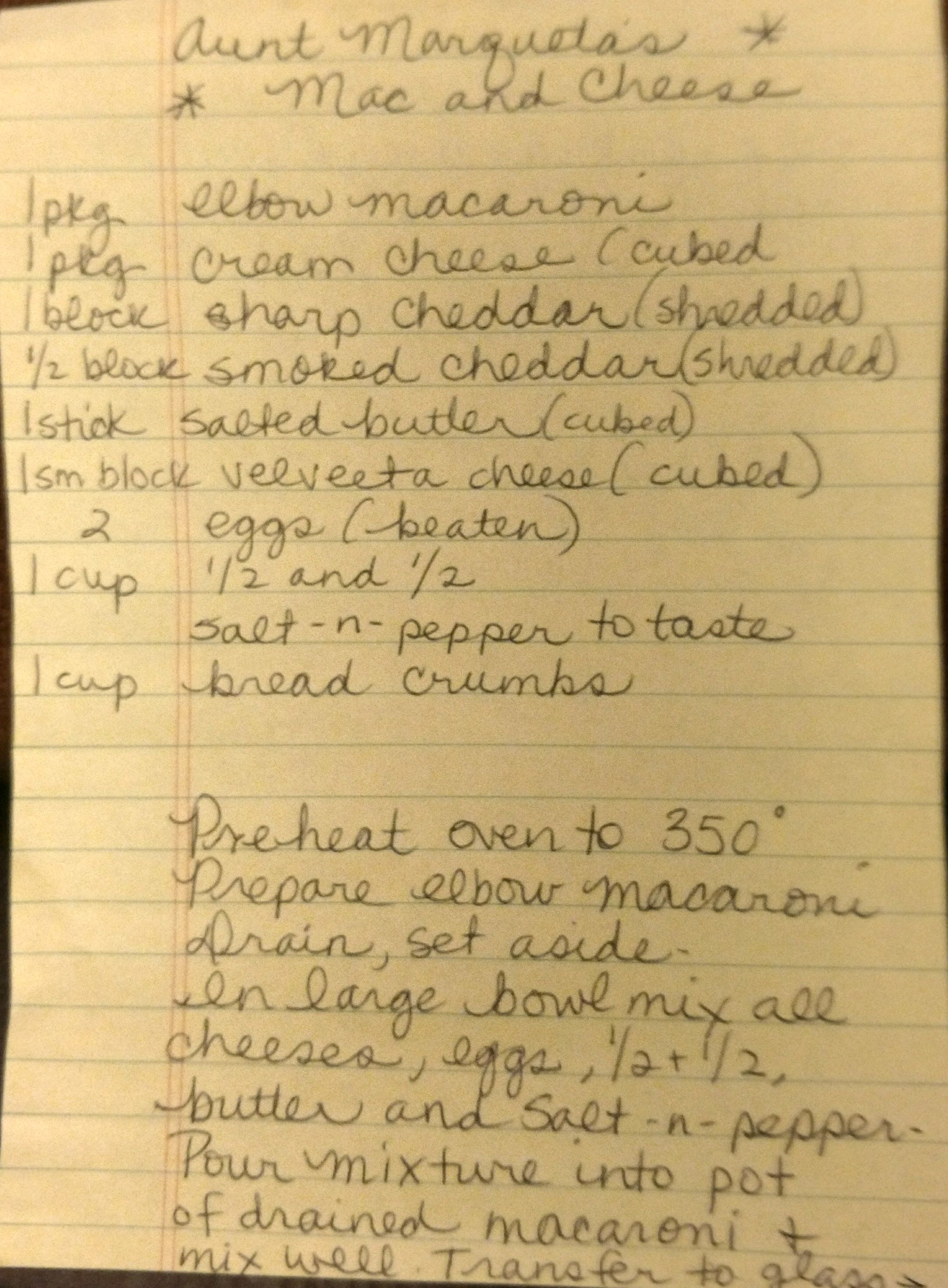 A: “What is the significance of red in Indian weddings?”

B: “ Well red symbolizes a married woman, so the groom spreads red tika called Sindoor on the bride’s hairline…Oh! And the bride wear red.”

B: “It can be a saree, salwar suit, or whatever she wants.”

Context/Interpretation: While different colors take on different meanings and degrees of significance around the world, red is almost universally used in the development of womanhood. Marriage is a defining moment of adulthood, specifically womanhood, in many cultures. Therefore, the red in Indian weddings stays consistent with the red symbolism.

SmarterTravel. “So THAT’S Why You Shouldn’t Wear A Green Hat In China.” The Huffington Post, TheHuffingtonPost.com, 26 Jan. 2017.

According to the article, “Red is the most powerful of all colors in Indian culture and holds many important meanings.” In fact, red can convey fear, power, fertility, love, beauty, and more. More significantly, red is known to symbolize an Indian woman’s marriage through red henna, red sindoor, and her outfit.

After a prior discussion about Indian weddings, the informant continued to describe the second day of the celebration.  In the morning of the second day, the couple is physically painted with haldi by the families. Haldi is also known as turmeric which contains cleansing qualities and produces a glowing effect on the skin.

Context/Interpretation:  The couple’s cleansing is both literal and symbolic. According to the informant, it is important for the couple to be cleansed by their families prior to the unification. The yellow haldi represents blessings, purification, and it is supposed to ward of evil beings.

During a discussion about Indian wedding customs, the informant described a common practical joke. There is a tradition in which the bride’s siblings steal the groom’s shoes. Consequently, the siblings set a price that the groom must pay in order to get his shoes back.

Context: This tradition is considered a practical joke as it is implemented at the expense of the groom. Practical jokes are especially apparent in weddings because the ceremony is a rite of passage.

A: “Have you had anything weird happen to you in your house?”

B: “In the same house as the oven story which was down the road from the cemetery, my bedroom was on the third floor and looked over the driveway. And so two of my windows looked out over the entire driveway. And my best friend, Lloyd, would always tell me that he saw a white figure walking up and down the driveway, but I would never look. I would just say “Shut up. Go to hell.” *laughs* And he would always say one white figure. He always said one, but this one night, he said that he could see two figures. And he didn’t say it as jokingly as he had before, but I still just said “Shut up.” But he was really persistent, so we just closed the curtains.”

B: “No I never looked. And the next morning, I was like talking to my mom about what happened because we always talked about it, and she told me that there was a funeral for two stillborn twins on the day that Lloyd saw the two figures. The funeral was at the cemetery down the road from my house, and the people who had the twins were our family friends. And they had just buried their stillborn twins on that very day.”

Context/Interpretation:  This cemetery background information adds to the narrative’s performance aspect. Also, the informant’ friend is vernacular authority because the story appears more credible when others can support the main claim.

After asking about any unusual experiences, the informant recounted a peculiar situation that took place at USC.

“So one morning, I was just laying in the bed, facing the wall. After a little bit, I heard the sound of my roommate, Andrew’s, covers move, like the sound of his comforter moving… But I didn’t think anything of it because I figured that he had just moved his blanket. But when I turned over to look, Andrew wasn’t even in the room…”

Context/Interpretation: The informant lives with one roommate in a residence hall style dorm at USC. While the performer did not explicitly state that he saw a “ghost,” he described the occurrence as being paranormal as in out of the ordinary. The belief in ghosts in America is so vast, yet it strays from religion and government. However, it is very common for informants to refer to these types of stories as unusual, rather than ghostly.

I asked the informant to describe an unusual happenings regardings spirits or the soul. She answered with the following story.

“A few weeks after my dad died, he came to me in a dream. This was the most realistic dream I have ever had even to this day. Of course I was so overjoyed to see him and talk to him because he had just passed away. He told me that he was so proud of me and his grandchildren and that I’ve done a wonderful job raising them. After we talked for awhile, he said, ‘I’m sorry honey but I have to go now.’ I cried and screamed, ‘Please Daddy don’t go! Don’t go!!!’ He said, ‘I love you, I’m okay, don’t be sad and don’t be scared. I’m okay.’ He started to rise up, up ,up in the air, and then he was gone. The next thing I know my husband is saying, ‘What’s wrong?’ I was sitting on the edge of the bed, looking up at the corner where the wall meets the ceiling, and  yelling for my dad to stay.

Context/Interpretation: This collection depicts folk belief in a soul and implies the existence of an afterlife or spirit. Further, this narrative reflects the life cycle as the informant’s father spoke to her after death, and he mentioned new life, her children.