S. is a 55-year-old female Brazilian immigrant from Sao Paolo and the rural vineyard areas of Brazil. She has lived in the U.S. for about seven years. She says this song was popular around the rural areas and her mother sang it around the house as she cleaned.

This was near an area in San Antonio with a large Brazilian population around all the Brazilian steakhouses. We were picking her and her family up from their work.

Little White dove, what are you doing?

Washing laundry for the wedding.

I’m going to the window to flirt.

A young man in a white suit,

Hat tilted to the side, my sweetheart,

I had him come in,

I had him sit down He spat on the floor.

Clean up your filth there,

Pombinha Blanca is a folk song or traditional lullaby sung in a playful key that quickly turns furious both in tempo and key after the “spitting on the floor.” S. mentioned the lullaby reinforced some funny gender norms, encouraging harmony, but presenting the consequences of masculinity spilling over into sloppiness. In this entry, the folk song intended for children indirectly teaches gender norms just as Oring cites in his chapter, Children’s folklore in Folk Groups and Folk Genres. After establishing the social norms of feminine presentations and its rituals.

The following is a conversation with KL that describes her interpretation of the Brazilian legend of the Pink Dolphin (In Portuguese, Boto Cor De Rosa).

KL: So, basically, this story is popular among all Brazilians and it’s about a man who is said to have actually been a Pink Dolphin who would come out of the river and transform into a human. So, when he would come out of the water he would be dressed in all white and he would go to parties, acting like a human, and he was a very fertile man so he would impregnate a bunch of women in the village. So, there are a lot of conspiracies in Brazil about whether or not this is true, so some people do believe this is true, as crazy as it seems.

EK: So how did you learn of the story?

KL: Yeah, so this was told to me when I was on exchange in Brazil by my host parents right before I went on a trip to the Amazon Rain Forest. It’s just something cool that a lot of Brazilians tell, I was also told the story when I was in the [Amazon] rain forest, so it’s just a story that everyone kind of knows.

EK: So, it’s a pretty popular oral story then.

KL: Yeah, it’s pretty popular, if you asked around in the area, I’m sure someone would know. It’s one of those word-of-mouth things; it started in an Amazon village, the Amazon River was where he (the dolphin) was said to come out of, and now everyone knows, and different Brazilians will tell you their version of it or what they know about it.

EK: So, then what do you get out of the story?

KL: Yeah, I think that it shows that Brazilians place a lot of cultural emphasis on nature, like humans’ connections to nature, animals, and I think it’s really cool. It’s just an interesting story that shows that their culture is very much centered around family and nature and those connections.

I would have to agree with KL; it seems that Brazilians have a huge cultural emphasis on nature and family. Brazil may not be the wealthiest country in the world, but with this culture, they don’t place as much value in wealth as, say, Americans do. With the Amazon Rainforest in their backyard, there is so much nature to explore and appreciate. I believe the pink dolphin is only native to the Amazon River.

The Pink Dolphin who turns into a man to impregnate the women of the village shows the emphasis on family and fertility as well. However, it is interesting to me that the dolphin/male does not stick around after impregnating the women to my knowledge, so that could also be a statement on gender roles in Brazil. In most stories that I have encountered that are like this, though, it is often the female who is stuck with the child and the male who continues to impregnate multiple women, so it could also just be a theme of these types of stories.

“So my mother’s Brazilian, and in Brazil there’s this stigma against people from Portugal.  It’s kind of like how people in America view blonde people as being dumber than average, or maybe it’s more like how people in America see people from New Jersey as lesser people.  So like, in Brazil, there’s just this stereotype that people from Portugal are dim-witted or something.  Like, if someone does something stupid, Brazilians will say, ‘oh, how Portuguese of them’ which sounds really mean, but there is an heir of teasing behind it.  It’s not like Brazilians are bigots that actually have something agains Portugal, it’s just this kind of international teasing, but just with a little bit of truth behind it (laughs).”

This is a really interesting cultural stereotype to make because while it is playful, it wouldn’t exist if people didn’t at one point in time, believe there was some truth behind it.  I would be really interested in seeing how this stereotype originated, and if it was still teasing back then or if it was really serious.  And seeing that it’s even still slightly serious today, I would think that it was serious back when it originated.  After all, I don’t think it would have stayed around for as long as it has without people believing it to at least some degree, like the informant does.

My friend has a nanny named Lucia who would cook cheese bread for us when we were hanging out at his house. She cooked it for me the last time I went home, and it is a dish consisting of Cassava Flour, known as tapioca in the US, which I am told was a staple ingredient used in Brazil. They are small, pale rounds of dough, dating back to the first settlers and natives of Brazil.

Along with the tapioca, there were other ingredients used such as different cheeses and milks, not necessarily measured out but added in according to taste and what the consumer preferred. 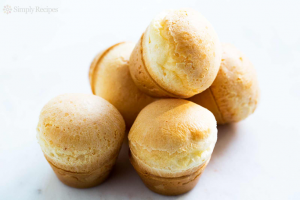 (I forgot to get a picture of the finished product but it was along the lines of this.)

When Lucia (my friend’s nanny) first started working for my friend’s family, she was very new to the US. She had been born and raised in São Paulo, Brazil, and began working for them when my friend’s sister was 2 (she is 22 now) and would learn English along with her because she was so new to the culture.

Lucia learned this recipe from her mother, as she would prepare it for the family, and her mother learned it from Lucia’s grandmother, and so on. This is the perfect example of a recipe passed down through generations, and at this point it wasn’t something she had to look up everytime she wanted to cook it, let alone be the exact same everytime it was prepared. The ingredients would vary from time to time, adding some variety to the dish while still maintaing the same base. Different cheeses would be added to change the taste, with some being added to make it more of a dessert, while you could add different cheeses such as parmasen and serving it with a more italian meal.

This cooking of cheese bread isnt necessarily my favorite, but I have found it in pastry shops as a more savory treat, and it is a nice treat from time to time. I like how it is a very adaptable dish, being able to make it with the same general ingredients but changing the variety to give it a different taste depending on the consumer. I’m personally a fan of recipes that don’t need a cookbook, with instructions that require exact measurements, and generally just give the cook a free pass to do whatever it is they want with the ingredients. This adds a level of artistic talent to cooking and I personally see it as a form of art.

Informant was a 45 year old female who was born in Brazil and currently lives in Brazil. I talked to her over Skype.

Informant: Saci-Perere is like a story of a black boy that has only one leg and he always carries a pipe and a red cap that gives him magical powers. And he’s a very mischievous boy, and he loves to do mischievous things like burn food or wake people up with laughter. This was in a tv show for kids called Sitio do Pica Pau Amarelo (The Farm of the Yellow Woodpecker) that I used to watch when I was a kid.

Collector: Do you know where the story came from?

Informant: I heard that it started like an Indian story, and that was at first an Indian boy that was a curomim – a type of indian. But with the African influence, he became a black boy that lost his leg fighting capoeira, which is a mix of fight and dance typical to brazil. The red cap came from European influence, like a lot of Europeans would wear them because Brazilians wouldn’t wear it in the heat.

Collector: So you said you saw it in a TV show, did the TV show create this character or did it take the pre-existing tale and make it into a character?

Informant: This was something that was in our folklore and Sitio do Pica Pau Amarelo used the story and I knew it through Sitio do Pica Pau Amarelo. Sitio do Pica Pau Amarelo was a story, not a soap opera, but was a story of a boy and a girl. And this girl had a doll called Emilia, who was a talking doll. They lived with their grandmother in this farm, and they had lots of stories that was placed in the country side of Brazil. So in the show it happened a lot of things that kids usually play in the country side. Another character was Cuca, who was like a monster like an alligator and all the kids used to be afraid of and had other characters from folklore. Cuca was the villain, and every time Saci-Perere came he was funny, and we used to laugh.

Collector: Why do you like this particular piece of folklore?

Informant: I liked Saci-Perere because he was fun, and everytime he came on the show he would make funny things and we used to laugh. It was a very big part of my childhood, we would talk about it a lot at school.

I personally like the story of Saci-Perere because I remember from my childhood in Brazil watching the same show that my mother watched “Sitio do Pica Pau Amarelo,” and seeing him in it. As a young child, I never really registered who he was or thought about the reasons why he was the way that he was. He was just a form of comic relief, and I very much enjoyed watching him on the show. I think it’s interesting that the true story of Saci-Perere came from a mixture of a lot of Brazil’s cultural history, such as the original indian tribes and the slavery of African Americans and capoeira, which is really famous in Brazil.