The following is a common filmmaking joke phrase:

According to the informant it means that you will let the editor deal with it.

The informant also added that it is said by a lot of newer people but describes it as less funny the longer you have been there.

Thoughts: I think it’s kind of funny how the reception of a joke can show how long you have been in that business, if you are a newcomer you will laugh more than a veteran. It can sort of outline your status. I also find it funny that the joke is technically about not wanting to do work, so you are passing it off to another person. I found that to be a common idea in many occupational jokes.

The following is a common filmmaking joke:

How many grips does it take to fix a light bulb?

None, let the gaffer do it

The informant explains that gaffers only handle electrical work, while grips handle everything else and its disrespectful to do the gaffer’s work if you are not one

Thoughts: I found this joke to be amusing, mainly because you can look at it from two sides. One, that you do the work you are assigned and don’t take someone else’s work. Or two, you don’t want to do extra work, so you leave it to someone else. I find it funny that even where I work retail, we have similar jokes, about not wanting to do extra work too. 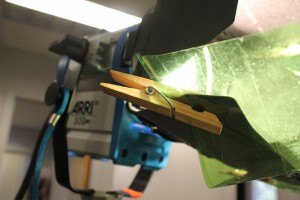 Hey, so why are ADs bad in bed? Because they think two minutes is a really long time.

Understanding of an assistant director’s job sheds light on the reason for this malicious sounding joke.

In the United States, the assistant director (AD) belongs to a film’s “production” department, meaning that they work for the director and producers in a non-creative capacity. Their job is to “run the set” so that the crew is able to capture every shot planned for that day. The AD is responsible for scheduling the order of the shots taken that day for maximum efficiency, communicating with every department so that they know what they need to prepare for as the day moves along, and keeping track of the time. This can mean that the assistant director needs to make decisions that place higher priority on one department’s work over another. For example, if the crew is running thirty minutes behind schedule, the AD may need to talk to the director about cutting a shot, or to the art department about spending less time dressing a part of the set, or to the director of photography about making the lighting on the actress’ face a little less perfect than he wants. Anything to save time. Because assistant directors serve the big picture, they are often viewed as the enemy of the individual departments.

This joke belittles the sexual prowess of the assistant director by using the AD’s primary function as the set’s time-keeper against him. The intention of this is clear – while the joke itself does not undermine the authority of the assistant director on the set, it separates him from the rest of the crew, and depicts him as being the same as, even less than, everyone else in other aspects of his life. The joke tells the crew that while the AD’s watch has power on the set, off of it, it would make him look like a fool.

My subject felt that the joke was humorous simply because it is, in her words, “accurate.” Assistant directors are always keeping track of the time, but off-set in many situations this trait is often inappropriate. In this way the joke also comments on another aspect of life within in the film industry, which is the necessary separation of one’s life in film production, from their home life or social life. The long, fast-paced, stress-heavy hours of film production work are often compared to being at war. One’s mental, emotional – and as this joke implies, sexual – health can only be maintained by a clear separation between life on the set, and life off of it.

Notice too that the joke seems to imply that the assistant director is a man. (Jokes revolving around the premise of climaxing too quickly during a sexual act are typically aimed at men.) This assumption within the joke is not entirely inaccurate as the majority of crew positions in the film industry have historically be held by men. In this particular case the joke was told to a female assistant director, who laughed in spite of her position.