Informant: “It’s from the Florida Keys, I don’t know how old it is. I don’t think it’s that old. It might only go back to like the 50s and 60s. But, it’s a way to cook food for a bunch of people quickly and easily because the trash can turkey is all about 2; a 20 gallon trash can, metal of course, a 20 pound turkey, and 20 pounds of charcoal for 2 hours and anybody who has ever roasted a turkey on thanksgiving knows that doing one in the oven takes a damn sight longer than 2 hours. But in the trashcan oven you can do it in 2 hours and it comes out really good. It holds in the moisture and the bird comes out pretty tender and every time I’ve ever done it, it comes out good. But basically what you do is you take the bird and you have to stand it up, sort of, and so in the true red neck fashion that started this whole thing, you use a jack stand from a car, you know like you would jack up a car and then put a stand underneath it so it will stay there. So, you take one of these things and cover it in tinfoil and basically set the bird on top of it so he is sitting there sort of with his wings up and his legs down and this thing is sort of up the cavity of the dressed bird. So anyways, then you set that on the ground, on top of another piece of foil, and you set the metal can over the top of the bird and then fold up the corners of the foil, and in some cases, they say you seal it up with sand. And then, you take your 20 pounds of charcoal and then you spread it around the bottom of the can and take half a dozen or so briquettes and set them on top of the can and you use a charcoal lighter, and because you don’t actually expose the bird to the charcoal lighter flame, you don’t get any charcoal lighter taste in the bird. So, you cover the briquettes, you light them off and then, just like you would a charcoal fire in a grill, you let it go. And, of course, that stuff burns pretty hot and gets the inside of the can really hot and it roasts the bird and, you know after that, after about 2 hours, maybe a little longer, but around 2 hours, the charcoal is pretty much all reduced to ash. There may be some red cinders inside it, but it’s mostly ash at that point, you’ll take the can off and the can is freakin’ hot so be careful, and then be careful not to get any of the ask on the bird, but you will find the bird inside golden brown and really moist and so there you go redneck trashcan turkey.”

Interviewer: “And who did you learn this from?”

Informant: “My redneck parents. (laughs) My parents retied to the Alabama coast or what my father affectionately refers to as, he lives in LA, Lower Alabama, or otherwise known as the Redneck Riviera. So on the Alabama coast, apparently they learned about it from some other retired friends of theirs who apparently spent quite a bit of time in the Florida keys and they learned about cooking the turkey in the trash can and of course I didn’t believe this at first but my dad came over and showed me and I found, how about that, it actually works.”

Interviewer: “And you like this folklore because the end result tastes good?”

Informant: “Oh yeah, and its easy, its really easy. All you’ve got to remember is 2. 20 pounds of turkey, 20 gallon trash can and 20 gallons of charcoal for 2 hours.”

Because I have had the opportunity to try a “Trashcan Turkey,” I appreciate this lore. It is interesting to see this lore in action because it is literally a trashcan with charcoal on top of it (see images below). In addition, there are a few requirements to cook the turkey properly. Most importantly, there needs to be a place where the turkey can cook; this is usually over a small pit of sand or dirt. Also, achieving the proper cooking conditions can be difficult because rain or excess wind can blow out the flames and prevent the turkey from cooking. In addition, if you have pets, you need to make sure they stay away from the flames. 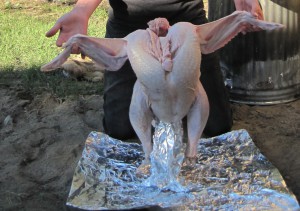 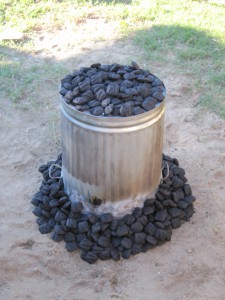 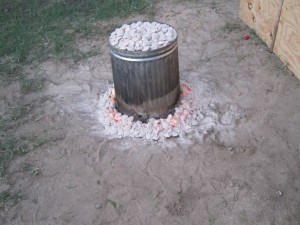 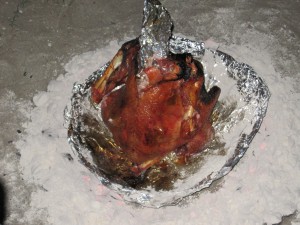