This is a schoolyard game played by mostly teenagers. It is played between two people. My informant used to play this game in middle school when he lived in Texas. This is a game of strength and determination. The first person makes a fist and hits the other persons knuckles as hard as they can with their knuckles. Then the next person does the same thing. The person to give up first because of either pain or boredom, losses. He said he used to play this during lunch time or recess.

This game is a manly game mainly played by boys. In a society where brute and strength determine man, it is a perfect game to play to see who is the strongest and the most manliest. It would be rarely played by girls or woman.

I think that this game is very interesting in the sense that society is so keen in trying to see who is the strongest and manliest. I am pretty sure this game has been played for as long as we can remember. This part of society never changes. There are many variations to this game, including putting a quarter in between your fingers and then hitting the other person thus hitting them with a quarter. This game is very interesting and has an important part in society. 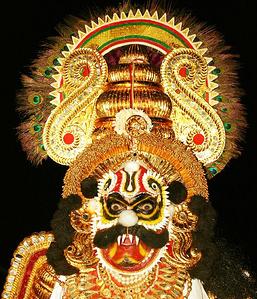 My informant told me ever since she was young they would have a bootham picture in the front of her house. This would be located at the outside entrance of the house. In literal translation bootham means ghost. My informant said that these pictures were put up in front of their house to ward off the evil spirits that may come to haunt the house. In essence the pictures were used to scare the evil spirits away. Many of these bootham pictures were pictures of Raksashas. Raksashas are demons or unrighteous spirits in Hindu mythology. The picture above shows a Rakshasa as a person in a costume. My informant also said that she stopped using this superstition when she came to America when I was a little child. She said that due to cultural differences she really couldnt put up a picture of a demon spirit in front of her house.

She stated that instead of putting up a picture of a demon so the evil spirits would be warded off, she resorted to another superstition. She put up a mirror right across from the entrance so if evil spirits do come in, then they will see themselves and be scared off.

I believe that these superstitions are very accurate to the religion of Hinduism, which I am apart of. The information my informant told me about this superstition was very fascinating and it reinforced my knowledge on such things. Growing up I would always wonder why there was a mirror in front of the house but now I know the real reason, which is to ward off the evil spirits from our house.

My friends and I first played this game when were over at a friends place for a birthday party. It was in 3rd grade. We were bored one day so I told them about a game that we could play which my cousin told me about the summer before. The point of this game is to find the hidden object. We would be split up into two teams. One team would hide the object and the other would try to find it. We would have a base and that is where we start out. From there the hiding team leaves colored coins on the ground for the finding team to follow. Green coin meant straight, yellow meant right, blue meant left and red meant backwards. So the finding team would follow the coins to the place where the object was hidden. So in reality of the game it was more fun for the hiding team because they were the ones who would lay out the map. We would play this game for hours, because my friends house it big and we could make a lot of different routes.

I think this game was made into a real game only after I told my friends. Before that it was just a small little thing my cousins and I would just fool around with. Only after I told my friends, it was made into an official game. Even today, many of my friends siblings play this game. We havent played it since our younger years because we have sort of grown out of it. We played this game mostly because it was really fun and that it was a good time pass during the long summers.

I dont think anyone else has played this exact game but Im pretty sure that there are people who play some kind of variation of this game. This game is very similar to playing pirates or finding gold on a map game. The main purpose is to find the object using the clues that the coins give you. This game is a very important discovery in my childhood and it is very close to me because it made me into a game maker and not only a game player.

This superstition has been there for a long time in my family. My informant told me ever since she was a young girl, her mother used to tell her not to cut her nails after dark. She has passed on the same thing to her children. She has told me numerous times not to cut my nails and sometimes even my hair after it has gotten dark, usually 6pm. She always said that you will get bad luck if you cut your nails after dark.

She said that in the olden times when there was no electricity, it would be too dark to see your nails therefore you wouldnt cut them. That has stayed on even now with such modern technologies such as light. It has been a passed on tradition of sorts that we do not cut our nails at night.

So basically the only reason my mother doesnt want me to cut nails at night is because there wouldnt be enough light, even though we have electricity. I think that this superstition is very funny and not valid at all. The only reason it was true was because back then they didnt have lights inside of their houses. But with modern technology this is changed.

There are many different variations of this superstition. One main variation of it is, not to cut your hair after dark. The logic is the same as cutting your nails, you would cut your hair horribly wrong when there is not light. Just like the nails superstition this could be forgone in modern days, but because of tradition and heritage this is still kept as a family superstition.

Down By the Banks

Down by the banks of the Hanky Panky
Where the bullfrogs jump from bank to banky
Where the eeps, ops, sodapops
Hey Mr. Lilypad and went kerplops

Hand clapping games are very popular all over the world. My informant told me about one of her hand clapping games she played when she was young. The above lyrics are what two people sang while they smacked their hands together kind of like patty cake hand motions. At the end of the song they would shout freeze and they would hold their positions and who ever flinched or moved would loose the game. She said that she played this game at recess all throughout her elementary school years. She said that she would play this game out of leisure and fun and all her of friends played it.

As I was growing up in elementary school hand clapping games were popular then too. As a guy I would not participate in them but because I had a younger sister I would know a lot about them. There are many variations to this hand game. I can remember at least 5 different hand clapping songs from when I was young and I am pretty sure there were many more. I feel that this game is played predominantly by girls because as children girls are more prone to sing songs play sit down games compared to guys who would play sports and run around. Many variations of this song have not only clapping of hands with the other person but they would also smack their thighs and each others heads. This game is probably played all around the world in many different languages.