There’s a national tradition that the first of May is the opening of duck shooting season. And, all over the country people go duck shooting. If you live in town, everyone knows someone in the country (if they’re into duck shooting, not everyone’s into duck shooting, but there’s a lotta people that are), what they’ll do is they’ll call up a local farmer and arrange to go duck shooting on their pond. A lotta farms have got more than one pond, and leading up to duck shooting season the farmers will start putting grain out at the ponds, to fatten the ducks, these are wild ducks, and as far as I know there’s not many domesticated ducks in New Zealand, a lotta them are wild. And so what happens is the farmers are trying to attract the ducks to their pond, so they don’t go to the neighbor’s pond, it’s actually a bit of a competition to be honest! So we lived on this 4,000 acre farm growing up, and we had a lot of duck ponds, and really these ponds are made to water the stock, so some of them are natural and others are made by my dad with the bulldozer. But then you always end up with ducks, in theses ponds. So the first of May is the beginning of duck shooting season, and it usually goes for two or three weeks, and it’s a national event. So every morning, on the first of May there’s this tradition where they guys (mainly guys, some girls) they go out with their shotguns. And some farmers build what’s called Mai-mai’s on the damns, I guess it’s a Maury word, Mai-mai, and what it is it’s like this hut that is camoflauged that they can go inside on the edge of the duck pond. So the guys get out literally at 5 in the morning so that they can be out and situated as the sun rises. And then the tradition too, my dad’s really not a big drinker, but there’s a major tradition where the farmers will take a bottle of whiskey, or they’ll have already stocked the mai-mai with whiskey and beer, and some farmers have traditional drinks. Like it could be scotch, it could be scotch and water, like in the south island it’s scotch and water, like a lotta them will have stashes of scotch and water in their mai-mais. So dad would often go out on his own, and come back from his first morning of duck shooting with maybe, I dunno 20 ducks? And as we got older we’d get to go out with him. And he brings all the ducks back but then my brother and I would have to pluck them (cause no one wants to do that, so give it to the kids). So there’s this huge festivities around plucking the ducks, and sometimes you get geese as well. So my brother and I would be in charge of plucking the ducks, and my dad would gut them and clean them out, and then they’d go up to my mom, who was in charge of cooking them. And that’s where farmers’ wives would exchange different recipes for cooking wild duck. They’d cook in their own houses but they would share recipes. And each year it’d be like, okay this is what I’m gonna cook my duck in, and what about you, and they’d share ideas, and there’s always usually like, a little bit of Cointreau or gromaneyei or something like that goes into the gravy, just to add flavor. And the really nice thing about new Zealand wild duck is that its got no fat on it, its very gamey. They’ve got a very dark colored meat, and they’re so tastey and so tender. So the roasting pan would have up to three ducks in it, all lined up. You roast them in the oven, and some of the recipes I showed you’ve got varying things, like you’ve got duck with orange, duck with plum, and pineapple duck, and so you’d put like pineapple in the stuffing, so you’d have the whole theme going there. And usually the duck would be served with roast potatoes so once the duck’s cooked to a certain point you gotta put the potatoes around the duck as well. And the roast potatoes are sort of cut up, and then rolled in flour, and salt and pepper, and then dropped into the roasting pan, so they’re cooking and the juices of the duck get soaked up, it’s like a slow roast in the oven. And then it comes out and you make the gravy by hand, and so you’ve got like the roasting pan, you tip the fat out (there’s not a lot of fat though) and then you just sprinkle flour in there, and then some like, water from the vegetables that might be cooking, and then you use a fork and just stir it all up and add a little thickening. And it’s this really gorgeous gravy that you can have with the roast duck and then you usually have like peas or broccoli or something like that with it on the plate, it’s just so good.

So that all happens in one day, the first day of shooting?

Yeah, exactly, so we have roast duck that night. Oh, and the thing you’ve got to watch too, because they’re wild ducks, is because they’ve been shot with a shotgun they have little pellets in them. So my mom, especially when we were little kids, the moms are in charge of making sure that the kids don’t get the duck with the pellets, you’re told to chew carefully cause you occasionally crunch down on a pellet. You can usually tell where the pellets have gone in, and the ducks that my mom likes to cook first are the ones where they’ve been shot in the head, sounds a bit gory I know. The less pellets the better for kids, cause you don’t wanna be swallowing lead pellets.

So and usually what happens is when we serve the duck, my dad would carve the duck on the kitchen counter. Before dinner. That was our tradition.

And then my dad would then periodically go out during duck shooting and get more, and would usually freeze the extra ones so that you could have them for a couple months.

So is this tradition really specific to New Zealand?

Very, I think. Yeah, every country’s got their own rules, and what a lot of it’s about too is they’re wild ducks so they’re not protected, and if it was year round the population of ducks would go down, so the idea of only doing it for the month of May is that (I don’t actually know how long duck shooting season goes, I oughta google it, but it’s something like 3 or 4 weeks), and it’s just cause you don’t wanna overshoot the duck population. It gives them a chance to repopulate. And actually, the seasons are the opposite in new Zealand, so May is like, right into fall. So maybe there’s an assumption too, that springs been 6 months old, so any spring ducks would now be 6 months and be good eating, because they’re tender and young.

So it’s definitely a tradition, and when you go duck shooting you’ve gotta wear like greens and browns so that youre blending in with the countryside as much as possible. And my dad was always super careful with guns, like, and it’s interesting in New Zealand you only have guns for shooting animals, people don’t carry them recreationally as much, and they certainly don’t carry them for protection. And farmers have to license their guns and lock them away.

And the other tradition we had, we had geese at the back of the farm, and my brother and I used to go and, we never carried guns, what we would do is if you let the geese see you coming they’ll start walking up the hill to the trees, and geese need to run to fly. So if you walk them up under the trees, you can charge them, and we’d have a competition to see how many we could catch, and we had these flexible belts that were elastic that my mom hand made, and we’d take them off and we’d get like three geese, and we’d tie their heads together with these belts, so that we could go and get three more. And then we would take them home and chop their heads off and eat them. So we did our own geese catching! And we used it as proof that we could do it without a gun.

This is a ritualized custom that is performed annually both because it follows the earth cycle calendar, and because of the practical reason of letting the duck population repopulate. It is clearly both a family custom, and a societal practice, as each segment of the society has a different role – the men go out and do the shooting, the children have to do the messy but easy labor, and the women do the cooking. There is also an ongoing generational aspect, as recipes are exchanged from family to family and passed down through generations. The fact that the children came up with their own hunting method, and created their own tradition, speaks of the involvement and desire for involvement in the grown up roles in this custom, and a sort of proving their capabilities, as they came up with their own way of duck hunting. 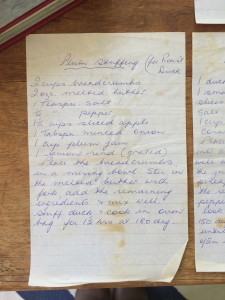 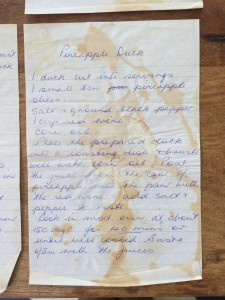 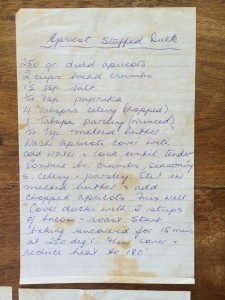