So my thing is more of a gesture. It’s kind of something that happens and I didn’t know about it till after I got my car. But basically, once you get the Jeep, there’s something known as a Jeep wave. And so basically it’s with, I don’t really know, like, I think there are different variations of how you do it. But the one I was told is that you put one hand and one hands on the wheel, and it’s just like, three of your fingers are just like couple your fingers up. And it’s the idea is if you see a Jeep, like driver and you and you’re driving your Jeep and you’ll see each other you do a Jeep wave. And it’s a form of like a community type thing, but like it’s really just like a wave that you do. So

Relationship to the Piece:

My informant has driven a Jeep for the last few years and was told this by his friend who also drove a Jeep and it’s become a way for him to connect to his community of Jeep drivers, especially as he recently began to drive his Jeep around LA.

My informant is a 19-year-old BFA lighting design student at the University of Southern California and I was told this as we were hanging out in a theatre on campus swapping tales of folklore.

I’d never heard of the Jeep wave, but I think it makes sense, as especially in America, the cars we drive often become aspects of our identity, especially with all the stereotypes we associate with certain makes and models of vehicles. It makes sense that a little community would form around certain cars, but it also creates questions, like who began the gesture and how it spreads.

BACKGROUND: My informant, AV, was born in the Philippines. His parents are also both immigrants from the Philippines and currently live in the US. This piece is an explanation of a gesture used in Filipino culture to signify respect. AV explained that this is something his parents taught him to do in front of elders.

CONTEXT: This piece is from a facetime call with my friend to talk about customs in Filipino culture.

AZ: A custom that we have in the Philippines is like — they can’t see me right?

Me: It’s only audio.

AZ: Okay well in my specific language, like my parents would be like, [speaks Tagalog] Like, I don’t know how to explain it, but basically, you take the person’s hand and hold it, you hold it in your hand and you kind of like, bring it up to your forehead like this. Basically, it’s like a sign of respect for your elders and usually you go to your aunts and uncles and do that. But like, it’s funny. I think like a lot of times when like adults don’t want to feel super old, they’ll be like, “Oh no, don’t do that.” But like, I guess as you get older, if you’re like my grandma or like my grandpa they definitely expect us to do it. All the older relatives too.

THOUGHTS: This gesture is really telling of the things that Filipino society considers important. As a kid, back when my parents were still fairly new to the US and staunchly steadfast in their culture, I had to show my respect to them by bowing my head and avoiding eye contact when speaking to them. On top of this, as the eldest daughter in the house. My mom always made me present a bowl of soap and water to my father and other older male relatives to wash their hands with whenever they ate dinner at our house. As I got older and my parents became more engrossed in American customs, I was no longer required to avoid eye contact or prepare my dad’s bowl. It’s interesting to me how the more “Americanized” I became the less I was required to show respect in the traditional way.

P.S.: It happened to me countless times, when abroad or speaking with non-Italians citizens, to receive this gesture, articulated in senseless ways, as an answer to my “I am Italian”, and…I don’t know, it has always been for me quite funny, but irritating at the same time.

My informant was born in Belgium from Italian immigrants and spent the first years of his life in Mons, before moving to Italy. Even after his transferring, he continued to visit many times his native country, and he had occasion of traveling and visiting a lot of world’s countries both for business and pleasure during his lifetime.

My informant talked about this piece -and then ‘performed’ it- in his living room.

I believe it is quite known that Italians gesticulate a lot with their hands while speaking, so much that they are told to ‘speak with their hands’. Many are, indeed, the natural hand and body gestures people from Italy use while communicating, and they represents, for the most part, a genuine and unconscious means of expression.
This particular piece my informant presents probably is the most famous one, which is often erroneously practiced by non-Italian speakers without acknowledging its real significance. As a matter of fact, this particular hand-gesture is the most-commonly used one to imitate and make fun of Italians, and it’s usually accompanied by nonsense exclamations like “pizza, pasta and mafia”. In reality, this gesture expresses and signifies concepts like “what are you saying?”, “who?”, “when”, so it is basically used to physically ‘supplement’ questions.

AH is the informant, my mom, and PH is myself.

PH: Do you have any folklore for my project?

AH: I don’t think I know any folklore…
(She then mentioned some stories that are told by other family members, but wasn’t comfortable telling herself.)

PH: You know so much folklore and you don’t even know it! It’s not just ghost stories, it’s sayings or games or hand movements you do, anything that you were taught in an unofficial capacity… Like, when you were younger, didn’t you put your hand up in a C or something?

AH: Oh yes, how do you know about that?

PH: You’ve told me before!

AH: How do you remember this?

PH: I just remember! Now, can you explain this to me as if I’ve never heard it before?

AH: When I was a kid in the ‘60s, and someone called you a name on the playground, teasingly or not…and now [current day] maybe you’d say “same to you, or something”…

PH: Okay, anything else to add?

AH: Well then they would put their hands up and do the same thing and it would go back (laughs)

PH: You said “their hands”? Plural?

AH: They, as in people in general, but just one hand…. So that would’ve been the late ‘60s when people started to say “cool” and “man” and stuff like that

PH: Do you remember how you learned that?

AH: No, it was…I don’t know if it was made up in our school or if it was something everyone did at that time

PH: What age would you do this?

PH: Do you think it was an age thing, that everyone at that age was doing it, or a time period thing, as in people from different age groups were all doing it at that time…?

AH: I doubt if high schoolers would do it… It might’ve gone to middle school..

PH: Does this have a name?

PH: So there was a name?

AH: No probably not.. I wonder if it had anything to do with Star Trek, which was around that time too! (laughs) 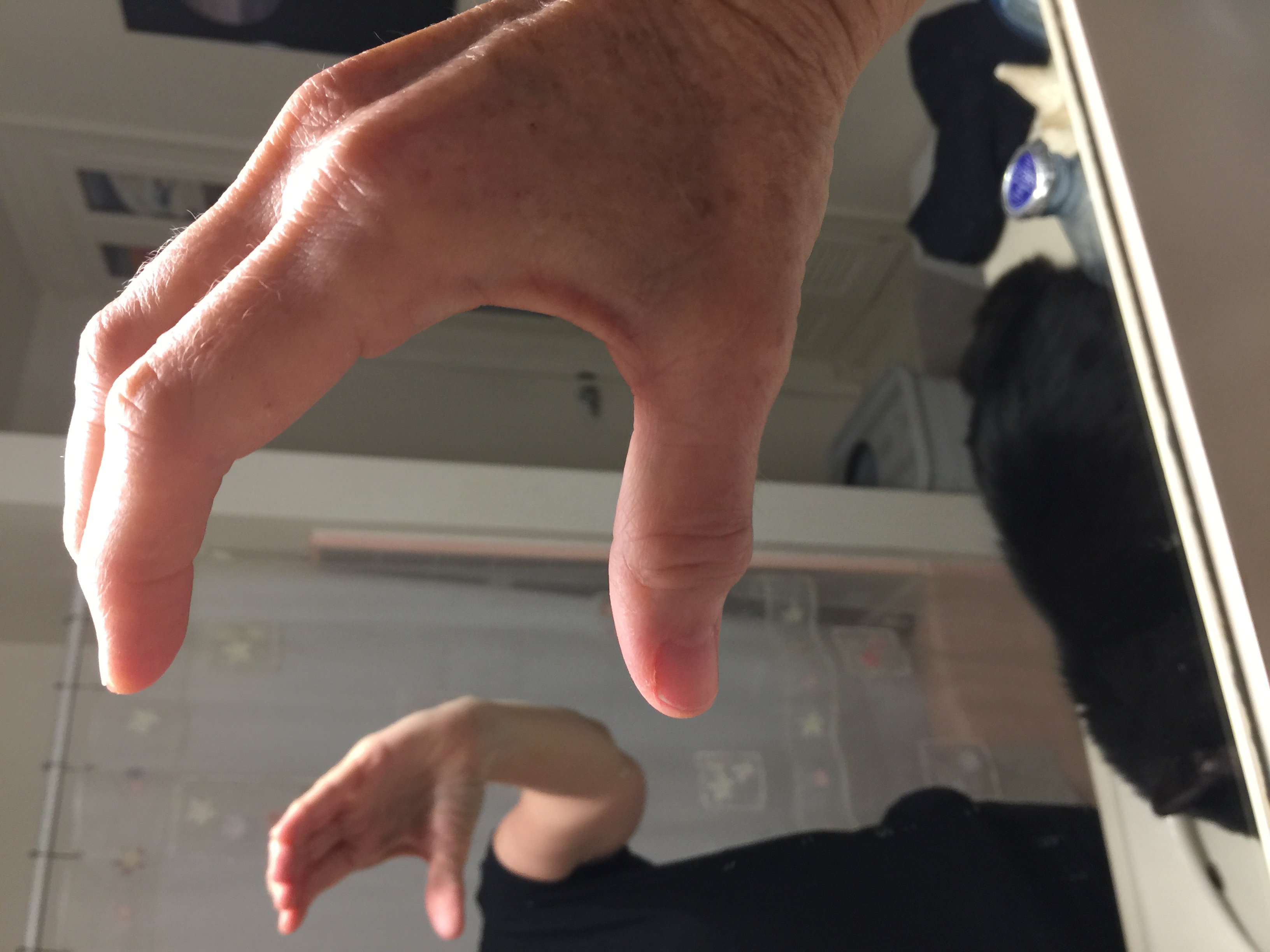 My informant was born in South Korean, but moved to America when she was 16 years old. She explained to me how when she first moved, she was very confused by some of the cultural differences including hand gestures.

In America, we wave people over with our palms facing up. A similar motion that is common in western culture to beckon someone over is curling the index finger. However, in Korea both of these are considered extremely rude and degrading. They typically use the same hand motions to gesture over dogs.

Respect is a huge attribute in Asian culture. It is deeply rooted in family and demonstrated formally through gestures and language. Therefore, using the “American wave” on a human is equivalent to treating or calling them an animal. Koreans will signal people over by having their palm face down, and using a little “digging” or small swimming motion with their hand. Another way to describe it would be having your palm face down and waving it up and down vertically. If you tried calling a cab in Korea using the Western style wave, you would undeniably be rejected and ignored.

At first, my informant thought that Americans were “kind of arrogant and snobby.” She didn’t realize that there would be a significantly different meaning in something as trivial as gesturing someone over. She eventually caught on that people were not intentionally trying to be rude, and that it was just part of western culture to call people over using the palm facing up.

This made me really think about how important it is to be culturally aware, especially while traveling. There are so many little differences that may seem insignificant, but is actually really important to recognize. It helps us better understand our global peers and can prevent us from accidentally offending others.