Background information: My brother is currently a sophomore in high school in Alameda, CA. He can still recall folklore he heard as an elementary school student at the school we grew up going to.

Brother: Behind our elementary school, there was a shed like right on the grass after the playground. It’s like a gardening shed, but I remember hearing a lot of different things about what people thought might be in there. Kids made up a lot of things – um, some said there might be a monster or some kind of evil creature, and other people said there was like a killer guy living in the shed, and that’s why you could sometimes see chainsaws in there. I don’t think there were actual chainsaws, it was more like leaf-blowers and gardening tools. I remember hearing different things from lots of different kids though, in all the different grades too.

Me: Did you ever go near the shed?

Brother: Yeah, I looked in one time and thought I saw like…a glowing red light? Like, I thought for a second that it might be an eye but it was probably just something reflecting or something like that. And other than that I just saw gardening stuff. I don’t really know what’s in there.

Hearing my brother talk about this garden shed was somewhat shocking, as I was surprised at how well I remembered what kids would tell me about the shed, and how eerie it seemed to me when I was a child. Folklore like this, one that is so widespread and widely talked about within your own community, can become so salient that, even years later, I could recall how scary the garden shed seemed to me and my friends – so much so that children rarely ever went near it.

I conducted this interview over the phone, the subject was born and raised in Scotland before moving to England, Canada, the United States, then to Northern Ireland, and, finally, back to the United States. I knew she continued to practice certain traditions which were heavily present in her childhood and wanted to ask her more about them.

Subject: Grandpa used to tell us this ghost story when we were kids about a drummer boy who had no head and would patrol the castles in Scotland. I have no idea why he’s headless or what happened, but he would sometimes get lost from the castle and show up to houses and play the drum to find his way home.

Interviewer: Was he scary at all?

Subject: Yeah, it was meant to scare us, cuz I think if you heard the drum it meant bad things were coming because the boy was so mad that he couldn’t find his way home.

Interviewer: Did it scare you?

Subject: When I was a kid it was frightening!

I looked up this scary story to find The Headless Drummer is a known tale in Scotland. According to visitscotland.com, “His identity and the story behind his decapitation remain a mystery, but it is said he made his first appearance in 1650. This was the fateful year Oliver Cromwell launched his invasion of Scotland which culminated in the capture of the castle following a three month siege.” I think there’s a certain fascination with young children who die at the hands of war, or defending something larger than their innocent selves. It’s a sad, glum fascination, but it’s clearly tied heavily to their past.

Madison: “Have you ever heard the story about the dog”

Madison: “So there was this woman that, uh, was blind and deaf and lived alone but she had a dog that would help her do things… like a service dog. They like had a great system going and the biggest part of their relationship was that she really depended on him for her comfort and safety in her way of life. If she felt uncomfortable and needed assurance she would stick her hand out and the dog would lick once if everything was okay and twice if there was something wrong. Actually… think she was just blind and not deaf, or maybe she was? I don’t know…but it’s okay. So one night, she went to sleep and she put her hand out like she did every night to make sure everything was good and the dog licked once. She woke up in the middle of the night because she felt movement so she stuck her hand out and the dog licked her once again so she thought everything was okay. However, the next morning when the dog didn’t retrieve the paper form the mailman she thought something was wrong because that was something he did every morning—which is funny now that I think about it because why would she need a paper. So anyways…we’re getting to the good part…she called the cops and they went to her apartment and she and the dog had been brutally murdered. On the wall in her blood wrote ‘humans can lick too.’”

Background: Madison is a twenty-year old female born and raised in Malibu, CA. She is currently a sophomore at USC.

Context: Madison is my roommate, and she told me this story one night while we were doing homework in our living room. Somehow, the topic of scary stories came up and she shared that one.

Analysis: Scary stories were a big part of my childhood and were always brought up at sleepovers and camps during my middle school years. I liked to believe they didn’t ever affect me, although the truly scary ones really did; I find the ability of scary stories to affect people emotionally really interesting since we typically don’t have any sort of legitimate evidence that the story is at all true. I’ve grown up with Madison, so hearing her share a scary story now that we’re older immediately brought me back to the sleepovers we had as kids and the scary stories everyone used to tell. It is an intriguing cultural characteristic to analyze that we enjoy hearing and sharing scary stories, and I am curious to investigate when this specific element of folklore began and how it manifests in different cultures around the world.

She was a woman that went out every night to wash by the river. Everyone would hear her washing. But no one would go outside. They would see a woman that had long hair that would drag on the floor. She seduced the men. The story is often told to children to scare them into not misbehaving.

My tia Estella did not listen to my grandmother and went out at night. She was using the bathroom outside and she saw a tall women standing there. The woman had long black hair. And she was washing. My tia thought it was one of the neighbors washing. She approached the lady and when the lady turned to her she was a skeleton. My tia became mute and ran away from the women.

My informant is a service coordinator. She likes to help people. She also migrated from El Salvador to the United States. Most of her stories are from her mother or personal experiences.

I talked to my informant over coffee in our house.

The interesting part of this piece is the similarities between this and the Llorona of Mexico. It is also interesting because my own aunt experienced it. This story is a classic tale Salvadoran parents use to keep them from misbehaving. 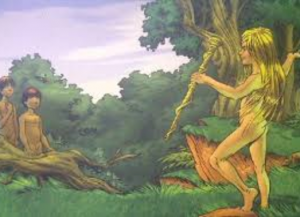