The informant showed me a piece of jewelry that she recently obtained from an expedition to Greece. It is strung on a very simple rope necklace. The pendant is what is called an “evil eye”. It is a vivid sapphire blue and in the shape of a circle. There is a smaller white circle within the blue stone. Finally, there’s a black dot. It looks like a bullseye target. The stone appears to be made out of some sort of glass, and the blue and white circles within it appear to be paint or a glaze. My informant told me that when she bought it, there were various sizes available – pendants, earrings, rings, and even large versions that you could hang on your door or as room decor. 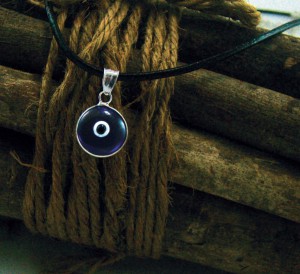 My informant says that she picked up the item when she was on a cruise in the Mediterranean. She got it at the port in Mykonos at a street vendor, however she recalls seeing the exact same “evil eye” jewelry in Turkey. The store vendor in Turkey claimed it was a Turkish artifact, which may have to do with “Romantic Nationalism”.

My informant tells me that the store vendor says it’s to ward off bad luck.

Analysis: According to Dundes, the evil eye was thought to be the eye of envy – where a person giving someone else a look of envy could put a curse on that person. In Greek superstition, it is said that if someone felt like they were nauseous and had a sense of foreboding, like something bad was going to happen, it had to do with the evil eye curse. In the majority of the research, the curse was thought to be unintentional, and the result of an envious stare. A common practice is Greece and Turkey is to pin an evil eye pendant onto a newborn or a baby in order to protect them from harm. This artifact is actually found in many cities across the Mediterranean, making it hard to pinpoint a specific origin, however the general consensus among researchers is that it started in Greece.