Context: The subject of the interview is an older man who grew up in southern California

“When I was in high school at some point, I turned to my dad one morning and asked “hey dad is there something you could teach me to cook”. He said that he doesn’t cook much but he could teach me how to cook a hole in one. And I said no I didn’t say anything about golf, I said cook. He said I know, it’s called a hole in one. I asked, what’s that? So he said he’d teach me. He said get that piece of bread and butter it up on both sides. He said now take a little knife and make a circle in the bread. And so you’re cutting around the circle in the bread. Now take that little circle out of the bread. Now go over and put a pan on the burner and turn the burner on and put the piece of bread in the pan. It will start to cook. So what’s next? So now get an egg out and crack the egg into the hole. When you crack the egg and the egg starts to come out the shell, make sure it goes in the hole. All of a sudden it starts to cook and within about five minutes it starts to look done. Now take a spatula and you’re done. And finally, as my dad would say, yokes on you”.

This piece of folklore is an example of folklore that is passed down through culinary activities. This genre of folklore in particular is greatly rooted in cultural and familial practices. It is usually in a familial setting that someone would be cooking, and food usually has ties to a greater culture.

The interviewee is one of my housemates and we often engage in conversation about his Danish heritage. This folklore is a food ritual that he practices as part of a family tradition.

The following is transcribed from the story told by the interviewee.

“Every Christmas eve we would eat pickled herring and rice pudding. The tradition is that we would have a bowl of rice pudding and at the bottom of one of the bowls there would be an almond. And whoever would get the almond would have good luck the next year. And in order to celebrate this good luck, the person who got the almond would get a marzipan pig. Sometimes if we got too lazy to go to the store to buy the pig, we would just make a different animal out of marzipan. Last year we made a penguin out of marzipan and I remember once we made a spider. It’s just a fun thing that we would do every Christmas eve.”

This is a Danish tradition that serves to celebrate a festival. The ritual happens near the end of the dinner and is meant to bookend the festival by giving a person luck for the coming year. For the interviewee, this custom is very much about having a shared experience with the family, and one that is fun and wholesome. The tradition has clearly developed over the year, the family not just using a marzipan pig but allowing the children in the family to create new and interesting animals such as the spider or penguin. But ultimately, the spirit of the custom remains the same. On a cultural level, this custom helps enforce the end of a year and celebrate new beginnings.

My informant is an 84 year-old woman of Spanish / Cuban ethnicity. She grew up in Havana, Cuba and lived there until she had to leave due to the communist regime at the age of 22. This story was told as an explanation of what they used to do in Cuba the night of December 24th. She enjoys this tradition because it reminds her of young days in Cuba when things were good.

“The Christmas tradition… uh La Noche Buena (The Good Night) took place on the 24th in Cuba, the day before American Christmas. What happens is um ah its a family event where everyone is involved in the process of preparing a whole pig to eat. First the men in the family traditionally kill and clean the pig, and all family members are included in different parts of this process. Grandmothers are usually in the kitchen preparing spices and all sorts of dressings and other simple dishes, usually served with rice and beans and uh… plantains. The second part is a man’s tradition of roasting the pig in an outdoor area. While this happens towards the end, ah the women decide who is gonna sit where, where are the things going at the table, who is gonna serve, who is gonna carve. In this tradition women have 100% control of all of the things that occur ~ even after the meal, men will have zero involvement. A variety of desserts are fixed from Spain directly, usually you bought at someplace that the desserts were created in Spain. You know, now the food items are not there, you cannot find a pig, things from Spain, you cannot find beans, most people are hungry and hoping to find any food. Also, Santa Clause does not exist in Cuba, we have the 3 kings.”

I thought it was really interesting to hear how this story reflected the times of the early days when my grandmother was still in Cuba. It seems as though women and men both had very distinct roles in this process and were extremely diligent in following these confines. Animal rights were also another interesting perspective from an American point of view. In the US, today it might seem inhumane for every household to slaughter a pig on Christmas. However, in a lot of other places, it is still totally normal to slaughter your own meat for a meal and can even be thought of as showing more respect for the animal, depending on how it is carried out of course.

Cuban culture does put an emphasis on family events and the bonding and delegation of roles within a family. It is some of these ideas that help to keep the culture strong with lasting ideas and beliefs. Today my family still roasts a whole pig in my grandma’s backyard on Christmas. It is a huge tradition, we definitely are not as rigid and do not slaughter the pig ourselves, but it does feel like the Cuban heritage is still coming through in its own way. 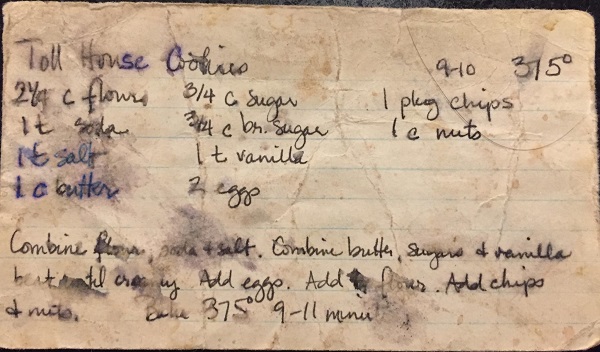 I’ll rewrite the recipe because the original recipe sheet is so tattered from use and time.

The recipe above is for the Informant’s homemade chocolate chip cookie recipe. I asked it there were any special instructions left out of the recipe card and she stressed the importance of various ingredients and methods. Real butter should always be used, never margarine. The butter should be at room temperature to make the mixing process easier. It has to be light brown sugar, not dark brown sugar to get the flavors right. She says the most important mistake people would often make is to not pack the sugar down into the measuring cup. It is a dense ¾ cup.

Typically, it is the women in the family that bake. The men always make things to crispy, according to the Informant. The name on the top of the recipe is a bit of a confusing story. They were always “Mom’s Chocolate Chip Cookies,” but I was shocked to find out the recipe written above is from Toll House. When I asked, the Informant about this, she told me that she doesn’t really follow the recipe anymore, so the cookies are a little bit different every time. Baking cookies like riding a bike for her at this point. This prompted another question: then how she’s sure she has the right amount of any of the ingredients. She responded she just uses, “enough.”

The informant is my grandmother from Taiwan, her hobbies are going to church and cooking. She says because Chinese tradition is very custom and done in certain ways it is weird to “stray” off on doing certain traditions. However, our family has done many of the same traditions, except starting from my great-grandparents time (4 generations), we had done some of these Lunar New Year traditions differently.

Our house has specific dishes that we make:

蛤蠣 (Ha Li)- These are small clams. After eating the clams, we put the clam shells under the table. this is to signify having money, as olden times clams were a symbol of money and wealth with pearls and such.

年糕 (Nian Gao)- This is rice cakes. This is a homophone to 年高 (Nian Gao) which implies promotions or prosperity year after year.

鯧魚 (Chang Yu) – A type of butterfish. we are supposed to eat fish because it is also a homophone in an idiom 年年有餘 (Nian Nian You Yu). This means to wish abundance year after year, so every lunar new year we eat fish. In my family, we eat this specific type of fish.

I personally do not know why we eat that specific fish, I do not think it was because it was anyone’s favorite or anything. I think it was just a really cheap fish back in my grandparent’s time so it kind of became custom to eat that specific fish. We still practice all of these traditions today, including putting the clams underneath the table. This was interesting to hear because I had never asked or understood what doing all these actions implied, because I was rarely in Taiwan to celebrate lunar new year, I had no idea what or why my family would do such specific things.