Barbara is a Chinese-American who graduated with a B.S. in Psychology from the University of California, Riverside. Her parents are from Hong Kong and immigrated to the United States, before giving birth to her in Baldwin Park, Los Angeles. She recently received her Master’s in Clinical Psychology and is currently working at a clinic in downtown Los Angeles. Her hobbies are baking, exploring hipster cafes or restaurants, and reading thriller novels.

So, um, for Chinese New Year, also known as Lunar New Year, there’s a tradition that my family likes to follow. In addition to giving red envelopes to the youngsters who have not married yet, um, every year we like to, um, get some new clothes for the New Year, new shoes of course. And, the morning of Chinese New Year, we do a little ritual where we put on the new shoes and we kind of stomp around to step away all the bad juju and all the bad people or bad luck that will come our way for this year. And we just keep stomping, and during that time, we would chant, “Chai-siu-yurn!” Literally, it means like, “step away all the little people—the little people go away.”

Background Information about the Performance from the Informant

Ever since she could remember as a little girl, she performed this ritual with her family on every Chinese New Year’s. She enjoyed stomping on the ground and making a lot of noise for the sake of having good luck.

Context of the Performance

I interviewed the informant in my house.

Many Chinese people believe that purchasing and wearing a new pair of slippers on Chinese New Year’s would expel the negative energy from their household. By stomping on the ground of their homes, they are metaphorically stepping on the bad luck and the people who have treated them badly.

My Thoughts about the Performance

I was surprised to hear of this superstition, because my Chinese parents told me it is unlucky to buy a new pair of shoes on New Year’s Day. They said new shoes would bring me unluckiness and invite evil spirits to plague me for the coming year, since “shoes” in Cantonese is a homonym for “rough” and it sounds like the word “sigh.” Since the informant and I both have Cantonese backgrounds, I find it interesting how we have different superstitions regarding purchasing new shoes on Chinese New Year’s Day.

The Main Piece
“I never gave another person shoes for any sort of present, then they’ll run away from you.” There is a common belief that by giving a person shoes it will later lead them to leave your life. Although this is simply a superstition, it has caused many people to second guess what kind of gift they want to give anyone who’s relationship they hold valuable. After all, it is a simple act to get the person another gift that could potentially save them from leaving your life.
Background Information
My informant is my roommate, Sarah Kwan, a current undergraduate student at USC. She had heard about this unspoken rule from her friends back in China. The word for pair in Chinese also means “the splitting of two,” this definition lead to the belief that if one was to give a person a “pair” of shoes, then it was as if they were splitting apart as well. She told me that at first she questioned this because people were technically giving the pair together, thereby not actually splitting the two, but as time went on she began to simply accept the superstition. “I didn’t want to chance anything, it wasn’t like the world was going to end if I never got my friends shoes. I could always get them something else.”
Context
My informant is Sarah Kwan, my roommate and personal friend. Sarah gave me this piece of advice as we were shopping for my friends present. I thought shoes would be a great idea to give my friend because this way he could use it every day. She was shocked to hear that I had never heard this superstition before and strongly recommended that I also not chance anything with my friends.
Personal Thoughts
I personally am not too superstitious, but I can understand why obeying such a simple task is accepted and performed. Friendship is highly valued, not monetarily, but on an emotional level so why would anyone want to put something like that at risk. I thought the shoe superstition sounded unnecessary at first, but I can see where it highlights values such as friendship.

Informant: The evening of December 5th, we’ll leave out our shoes for St. Nick to come by and leave a present in. So when we wake up the morning of the 6th, we look at our shoes and know he was there! We’ve done that since before I can remember, but I think we got the shoes thing from my mom’s dad.

The informant is a student at the University of Southern California. She is originally from Florida, and has younger siblings who also participate in this pre-Christmas tradition. While she and her family also celebrate the more traditional December 25th Christmas, the informant insists that leaving shoes out on the front porch on the night of December 5th has always been a large part of her family’s Christmas festivities.

December 6th is, in western Christian countries, Saint Nicholas’ Day. In countries like Belgium, Germany, and the Netherlands, leaving shoes out to be filled with presents from St. Nick is a well-documented practice.

About the Interviewed: Yuki is a Japanese student  from the University of Hokkaido, currently studying western art and culture. She’s currently participating in an American homestay at a friend’s house in Southern California. Yuki is ethnically Japanese, and she’s said that her family has lived in Japan for a long time. She’s about 21 years old. 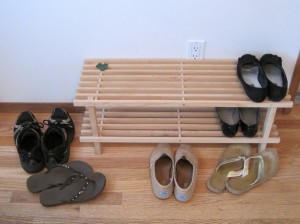 My subject, Yuki, was telling me about the customs involved when entering a Japanese home.

Yuki: “Japanese people don’t wear shoes in the house. We have a Gedabako [shoe rack] for putting shoes when you enter the house.”

I ask Yuki why she thinks that Western People and Japanese People have different ways of doing things.

I tell Yuki that it might be because Japanese floors are lined with tatami mats, which Japanese people sleep, eat, and generally walk upon barefoot.

Yuki: “Not all Japanese people sleep on mats. But it’s important to keep them clean. (laugh) Walking indoors with shoes on is still something I find difficult.”

In Japan, it’s seen as customary to take your shoes off when you enter the home. This is probably because Japanese people typically walk around barefoot, as well as sit upon the floor when they eat and sometimes sleep.

Japan isn’t the only culture in the world that has a custom against using shoes indoors. Countries in Europe, like Germany, Switzerland, and Scandinavia, as well as other Asian countries like Thailand and Korea, also have taboos against getting the floors dirty. I think it’s interesting that certain cultures are fine with the sanitation limits of using shoes indoors, yet others are more wary. Customs are oral traditions that are performed/enforced to maintain a cultural standard.

“Take off your shoes, please”…?

“You should never gift someone shoes. They’ll wear them and run away from you.”

This folk belief was told to my informant from his mother when he was a child. Because of this, he really never gifted shoes to anyone. Apparently, if you really want to give the gift of shoes to someone, they have to pay you a dollar so they are, in a sense, buying the shoes from you. My informant was not sure as to the meaning behind the belief and how it came about. He suggested that, in the past, perhaps people just did not want the gift of shoes so they came up with this to prevent receiving gifts of shoes.

I have also heard this belief from my mother. It seems to be a pretty widespread belief. I believe that it may have to do with the fear of loved ones leaving. Having loved ones leave you may be one of the most sad and painful experiences. Because people do not want this to happen or do not want to believe this to happen, they may attribute the break in the relationship to something trivial such as the gift of shoes.