Context: TA is a 71 year old clan head in Afghanistan and served as the Minister of International Relations for a previous president of Afghanistan. In this joke, he mentions Mullahs, which are educated Muslim men who often teach the religion. In the joke, TA discusses differences in religious rigidity.

Main Piece: The following joke was told to TA about six or seven years ago from some students he encountered in an Afghan village. He told me that the joke is primarily about religious rigidity, and it makes fun of how some people are too rigid with religious beliefs.

TA: Some boys, their fathers send them to the temple on Fridays to listen to some recitation from the Holy Book. And then the Mullah also tries to teach them religion. And he was telling the boys, “If at any time you have a crush on a woman or someone, you must go and take a bath because you’re not clean and you have to be clean to offer worship… you won’t be able to do that if you have a crush on the woman or you see her in a dream. But the thing is even if you have a dream, you’re dreaming of another woman and you’re dreaming of having sex with her. You must go, even if you don’t have any intimate relations with her, just go and tell her so that she also takes a bath.” So some young guys, they’re smart guys, and they wanna make fun of him. So the next morning he goes and he knocks on the Mullah’s door, he says “I’m sorry to say this, but last night I had a dream, and I had your wife with me in the dream. If you could please ask your wife to take a bath.” So the guy is very angry, but he can’t say anything because that’s what he taught them. And the next day he goes and talks to him again, and the Mullah says “what now?” And the guy says “Well, Mullah, you take a bath please.”

HR: Do you know, where did you first hear that joke?

TA: I was in a village in Afghanistan just a few years ago, 6-7 years ago, these were students I was talking to, and they told me this story…

HR: Do you think that this was a joke told to make fun of religion in general? Like how in the US we like to make fun of Catholic priests for some of the same things?

TA: Not so much in general, but it’s just about the rigidity… some people see religion as very rigid, and others don’t.

Thoughts: I think that the humor in it is similar to the humor in making fun of Western religious teachings. Whenever religion is so rigid that it locks people into hard rules for their lives, it invites them to challenge that authority through humor. This joke provides a divergence from religious culture while tying into the direct punchlines of other Afghan jokes.

Main Piece: “So when you step on the back of someone’s foot accidentally, giving someone a ‘flat tire,’ it’s bad luck if you don’t immediately take your hand and squeeze the other person’s hand.”

Background: This has been a tradition in the informant’s family her whole life. The family is Afghan, but lives in the U.S., and values their culture very much. The informant’s mother told her that stepping on the back of someone’s foot is bad luck. Bad luck is significant for the informant’s family; she notes that Afghan people are extremely superstitious. Her family believes in “jinn,” that demons, ghosts, and evil spirits can inhabit one’s body and mind. The informant believes this superstition is connected to one’s past life, where people are shunned for their “bad luck.” According to the informant, bad luck can be a disease someone is born with, but is punished regarding decisions in the past life.

My Thoughts: Stepping on the back of someone’s foot seems to be an act of callousness, but squeezing the hand indicates care and respect. The generational superstition has continued through the informant’s mother to the informant; in fact, I have accidentally stepped on the back of the informant’s foot before and she asked me to squeeze her hand. Readings in ANTH 333 touch on the ways superstitions guide daily life and routine. The fear behind something that may compromise one’s luck is obviously a factor in being accepted by others as well as an indicator of future well-being.

For another version of this superstition, see: http://weirdrussia.com/2014/08/31/russian-traditions-and-superstitions/ for the Russian version.

Main Piece: “So once my mom told me a story about a group of boys playing near a bridge. So they see a blind kid… um… and they ask why God would make this boy blind? And they feel very sorry for him. So in this story they ask God, ‘why did you make this boy blind?’ and then they tell God, ‘you should give him sight.’ So God does. God gives the boy sight. And then the boys are very pleased with themselves… uh… so they go to the top of the bridge because they have a game of jumping off of it…it’s a low bridge. But the blind boy who now can see has set up sharpened sticks underneath the bridge. So that when the boys jump, they all die.”

Background: The informant’s mother recently told her this story after her grandfather died a few months ago. Her mother had been told this story by her father as a cautionary tale about coming to the U.S. The informant says her mother understood this parable as an implication to not always trust what you think you know. The informant understands it’s meaning to be: “don’t question God ever because purpose is not in our hands.”

My Thoughts: A generational parable has survived through the family’s telling. The story’s dark nature evokes fear in the receiver of the story. I understand the telling of it as partly religious, partly cautionary, and partly moralistic. I find it interesting that the informant’s mother was reminded of the parable after her father’s death. The symbolism of blindness in terms of truth is a consistent metaphor in moralistic tales. Also important to note is the hesitance to trust American culture as an immigrant. I understand this story as told outside the context of religion, implying more about belief and trust than religion and morals.

Context: The informant is a grandmother of 8 whose parents were originally from Afghanistan but settled in Pakistan. She also lived in Saudi Arabia for many years and has a working knowledge of Farsi, Arabic, and Punjabi along with her native Urdu. She says that a common thing to say when you see someone  in new clothes, or looking particularly beautiful; or when someone has very good fortune in (for instance) an exam or a job; or, especially, with children and new babies; is 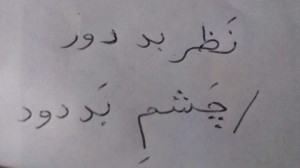 which, word-for-word, means “look-bad-far-away” or “eye-bad-far-away”, but translates to, “May the Bad Gaze/Evil Eye stay far away from you.”

Analysis: The purpose of this little saying is basically to keep away the Evil Eye, which the informant says can be put on someone if they are envied or have something that others covet (eg, good grades or good health). When the Evil Eye is put on you, you may fall sick, fail in your job or school, lose your money, etc. Children are especially susceptible because they are often the center of attention, especially in the informant’s Pakistani family, and so if someone merely looks at a child with selfish or ungracious thought in their mind, the child could fall ill or have an accident, etc. It is thus important to remember to praise God when you see something beautiful and not be jealous or ungrateful, and this phrase is a way to remind oneself of that, and also to express the desire to protect someone from others’ ill gazes as well. The informant said all this as what people “used to believe”, implying that the traditional phrase is kept even though the specific belief may have been altered or abandoned altogether.