About the Interviewed: Davey is a student at the George Washington University double-majoring in English and LGBT Studies. His ethnic background hails from Spain. At the time of this interview, he was currently on leave at his home in Southern California. He is biologically male, but he identifies as gender-queer. Nonetheless, he prefers male pronouns. He is 20 years old.

My friend Davey moonlights as a Drag Performer. I asked if he could define what drag is.

Davey: “Well, everything is drag, that’s what RuPaul [drag icon] says. To most people, it’s just dudes dressing up as girls, which is like, kind-of what it is, but not really. It’s a statement on gender, it’s a statement on performing. People come to drag shows dressed as men, people come as women, people come as whatever the hell they want, that’s what drag is. It’s an illusory gender performance. Men and women both dress as things you can’t describe. Men become Queens, Women become Kings, some become things that you can’t describe.”

I asked him if he could describe what a performance is like.

Davey: “That depends on the queen. When I go out there, I lipsync to songs by Rihanna, Beyonce – I like to be fierce. Most queens lipsync, some don’t. Some actually sing live, if their voice is pretty enough. Those are the fishy queens.”

I asked Davey what “Fishy” means.

Davey: (laughs) “Oh lordy! It means vagina. The more fishy you are, the more you look like a real woman in dress and make-up. Some queens try really hard to be fishy. I don’t have the make-up, or the skills. Yet.”

We then talked about Davey’s personal experiences as a drag queen.

Davey: “Well for starters, I’ve never performed at one of the [drag] clubs. You have to be pretty much be top shit to get in these days. I’ve just done it for parties and things. Just for fun.”

I asked him if the pursuit of “fishiness” was about emulating a standard of beauty.

Davey: “Yeah, I mean, everybody wants to be a supermodel, but I just wanna have fun. I think that as a drag performer, we’re attracted to these images of grandeur and beauty, and some respond by mocking it and others try to become it. It all depends on how you interpret it. It’s art. It’s meant to be that way.”

Drag is a performance that plays with the notion of Gender in Western Society. Performances take the form of wild cabaret shows, that showcase vibrant individuals who dress in ways that denounce typical gender norms. Drag can either be a form of Male to Female impersonation, or it can be something crazy and hard to pinpoint. Davey defines drag as a visual art.

As an artist myself, I resonated with Davey’s final statement on gender performance – that art is meant to be multi-faceted. Even within cultures, the meaning of certain performances or pieces of folklore are heavily debated. Ultimately, it’s up to the audience to pick and choose which elements resonate the strongest within themselves.

At the USC Lyon center, in the membership services area, there is a large metal cabinet, on which, are the name tags of all the employees. Usually, they are organized into some sort of design, which seems to change on a semi-weekly basis. My informant is an Employee at the Lyon center, and I asked him about this:

Can you tell me about the tradition of name tags making pictures at the Lyon Center?

Sure. So, uh, a lot of times we get board, here at the Lyon center, and there happen to be a lot of name tags and a large magnetic surface so to pass the time people will make patterns such as butterflies, hearts or even words, that say, like, “fight on” or like, “have fun” or “good luck,” etc.

The idea that student employees at the Lyon center make designs out of their name tags is interesting inasmuch as it shows a general propensity to create some sort of art, even if only out of boredom, and also the fact that school spirit seems to show through this tradition with such phrases as “fight on,” USC’s motto. It is also notable that most employees seem to take part in this design tradition, rather than a select few, as the design changes almost daily.

The informant is a sophomore at the University of Southern California. She is twenty years old. She is also the Jr. Helenes chair for the USC Helenes, which means she works closely with the girls at 32nd Street School and other Helenes to create a mentoring system.

The informant let me interview her about a friendship bracelet making activity that took place between the Jr. Helenes and the USC Helenes:

“Some Helenes and Jr. Helenes were at our regular meeting place, at 32nd Street School. I taught them how to make the bracelets. It’s fun to teach other people to make the bracelets and it’s just a good way to bond. I don’t know why friendship bracelets are popular but they’re symbolic and meaningful. And simply making the bracelet together is a good bonding experience…For me, it’s my way of showing someone that they’re important to me—but it’s not like everyone who’s important to me has a bracelet; it just depends who I have that tradition with. I guess I also like the idea that other people can see them and ask who it’s from. With the Jr. Helenes, it’s nice to have a sort of bonding exercise so we can become really close. That way we’re more than mentors—we’re friends. I got started with friendship bracelets when I went on a month long trip to Hawaii during high school. We were making so many new friends, it was a good way to celebrate that, I guess. I ended the trip with like 7 bracelets. I also like giving them to people because they know I care about them. I like to let them choose the colors and have them hold on to the end while I make it so that it’s a process we’re doing together, and the finished product is something that will make them think of our friendship whenever they see it. I also am kind of superstitious, and I like to have them make a wish on the bracelet, because supposedly the wish comes true when the bracelet falls off.”

I agree with most of what the informant says about friendship bracelets. They are definitely symbolic of a friendship and a way to celebrate that relationship. She also made a good point about the process of making the bracelet serving as a time of bonding. What really struck me about my informant’s experience with friendship bracelets was the superstition tied to them. This was new to me, but it really adds another element to the bracelets, making them even more of a shared experience between two people.

Friendship bracelets can be found in the movie Napoleon Dynamite (2004). In this movie, one character goes door to door selling the bracelets and later, Napoleon and his friend Pedro hand them out when Pedro is running for class president. Instead of being made from thread, these bracelets are made from plastic. 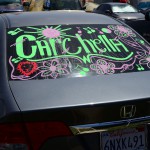 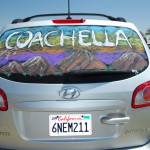 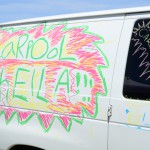 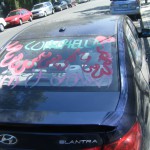 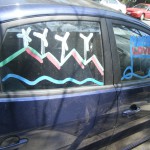 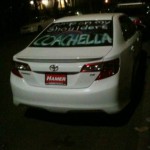 The Coachella Valley Music Festival attracts increasing crowds every year, in fact this year was the first the festival had to be recreated a second weekend to meet demand (and still sold out). The popularity of the festival encourages participation in many ritualized customs pertaining to the experience of Coachella.

One Coachella-specific ritual is the painting of cars that are going to be driven to Coachella. The ritual is so popular that the organizers and promoters themselves have recognized it as an iconic part of the festival experience. They host a “Carpoolchella” contest which rewards those who participate in painting their cars for Coachella, and their website hosts a gallery of car paintings.

One frequent Coachella-goer explains the ritual:

“Basically the main reason people do that now is competition. But people did it before, and of course not everyone even has a shot of winning so some people still just to do it as a big part of their trip.

It also represent where you came from. A lot of people are from out of state and they paint their cars to show how far they’ve driven just for Coachella. Like, carpoolchella-OHIO or something. I’ve seen a big giant New Mexico flag as the background for the Coachella landscape.

There’s people who go all out for this because they really associate it with their trip and getting to Coachella. Like sure you might win passes for life – but probably not. Some people just have always done it so they’re going to do it every year. It’s part of the checklist: stuff to survive the heat, survive the cold, drugs, food, first aid, car gear…car paint.”

This ritual first of all represents an establishment of Coachella culture. As the festival explodes in popularity festival goers want to show that they are a legitimate part of the festival experience. Those who have a longer tradition of going to the festival often have a traditional aspect to their car painting through which they can proclaim their veteran status. Those who are new to the festival want to make sure their experience is complete by enacting rituals.

There is also a slight superstition, especially for those who have made a habit out of car painting. Car painting becomes a necessary step in preparing for the festival, which if ignored could have as disastrous results as forgetting any other basic necessity. Since there is no necessity that car painting explicitly fulfills it can be seen as a sign of protection, especially for those who make longer roadtrips.

There are visual images and symbols of the Alpha. Theres a lot of ape stuff, and a lot of Egyptian stuff.

Theres Egyptian symbolism for (pause) once again, undisclosed reasons. I learned it during initiation, from people who were already in the organization. Its usually seen on banners and t-shirts and such. It could be on almost anything that has the Alpha Phi Alpha brand name on it. Some of the symbols are for informal purposes, on the collegiate side of things. I think that its fun to be able to identify with different personas or symbols. Its like a mascot, you know? You embrace it as an image of your organization.

There are a lot of things that the Alpha Phi Alpha symbols are place on. The symbols include an ape, or at times some Egyptian symbols as Jeremiah suggested. However, what is important about the different Alpha Representations is the fact that there are divisions between their professional representations, and their interpersonal/collegiate items. Their collegiate things are worn at get-togethers and during everyday use. The other Alpha symbols are used to symbolize the organization in a more professional and discreet manner.  Directly, below I have shown some representations of the different symbols. Each of the images below is a patch to be worn on clothing. These would be worn on fraternity jackets or other apparel. Many of the Alpha symbols also incorporate the number 1906,which was the year the organization was founded. 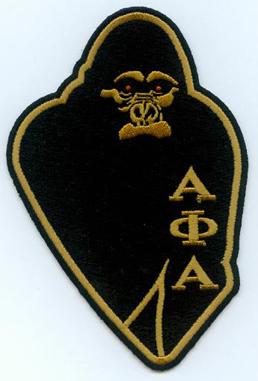 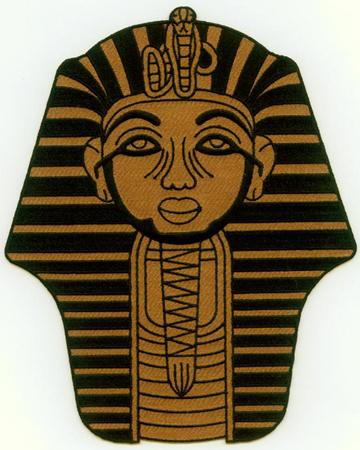 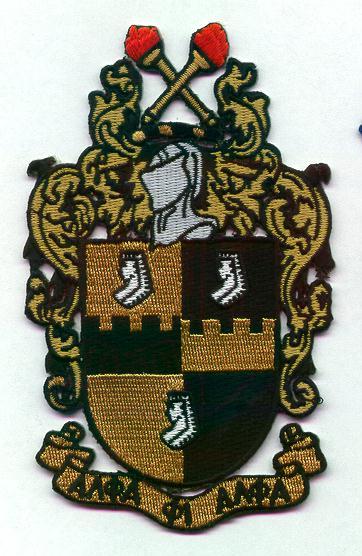